#TeruelWorldSBK. The Aruba.it Racing – Ducati Team is ready for exciting back-to-back at the Motorland circuit of Aragon (Spain)

A few days after the Prosecco Doc Aragon Round, the Aruba.it Racing – Ducati team is ready to get back on track at the Motorland circuit of Aragon for the fifth round of the 2020 WorldSBK season which will start on Friday at 10.30 am (CET) with the first free practice session.

The Pirelli Teruel Round will be remembered as the first back-to-back in WorldSBK history and will see the riders compete again on the same circuit where last Saturday Scott Redding and Chaz Davies conquered the second stunning 1-2 of the season.

Scott Redding will try to regain the leadership of the Superbike World Championship standings while Chaz Davies’ goal will be to get the first win of the season after the two convincing second places in Race 1 and Race 2 less than a week ago.

Chaz Davies (Aruba.it Racing – Ducati #7)
“The first race weekend here in Aragon was solid. We were fast since Friday then, unfortunately, the qualifying did not allow us to start in the first positions forcing me to push hard in the first laps. Feelings are good but it is clear that we are still missing some details to be at the top. The team is also working a lot in direct contact with Ducati at Borgo Panigale to produce the step that will allow us to fight for victory in the next three races”.

Scott Redding (Aruba.it Racing – Ducati #45)
“It’s the first time we’re going to back-to-back on the same circuit. If I have to be honest, I’m not a big fan of this format because I really like changing circuits. We will have to go through free practice again after the tests and the first race weekend, but this is a situation that all riders will have to face. The goal is to start the weekend with more incisiveness than we did a week ago. The team is working on this aspect and I have the utmost confidence”. 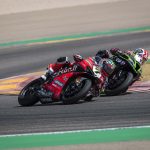 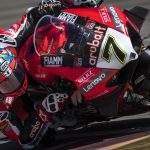