A stunning triumph for Michael Ruben Rinaldi. The Italian rider takes his first victory with the Aruba.it Racing – Ducati team (second career win in WorldSBK) at the end of a race dominated from the first to the last lap.

Scott Redding grits his teeth and closes in fourth place without being able to be incisive.

After the second place in FP3, Redding manages to get the front row at the end of the first qualifying session in which Pirelli provided riders with two “Q” tires.

Rinaldi seems to be able to take the pole position but a mistake in the second sector makes him lose two tenths of a second, forcing him to settle for the fourth place.

Michael Rinaldi’s start is simply spectacular. At the first corner he is already fighting with Rea (Kawasaki) for the first position and halfway through the first lap he takes the lead after having passed Razgatlioglu (Yamaha), too. Rea tries to stay glued but Rinaldi’s race pace is much better and forces the Kawasaki rider to make a mistake. In the last laps Rinaldi manages the race without any pressure and then he takes his time to celebrate: first with  the 5000 fans on the stands, then at the parc ferme with his team.

Despite a good start and a fight with Rea and Razgatlioglu for the second position in the first two laps, Scott Redding’s race pace doesn’t allow him to stick to the podium group

Michael Rinaldi (Aruba.it Racing – Ducati)
“Winning the home grand prix is a unique emotion. Today it was even more exciting due to the fans back on the stand after a long time: they are always able to give an extra motivation.
The race was long and difficult and I tried to find my pace.  Then Rea’s mistake while I was pushing hard allowed me to have less pressure. The smell of victory made the last two laps incredible for me. Now, however, maximum concentration on the two races tomorrow.”

Scott Redding (Aruba.it Racing – Ducati #45)
“It was a very difficult race for me right from the start. The feeling with the bike was not ideal and I had to take a lot of risks to push in an attempt to stay with the leading group. At a certain point I preferred to think about taking some points rather than making a mistake. For tomorrow we definitely need to find more grip. We will work this evening with the team to understand which is the best direction to take”. 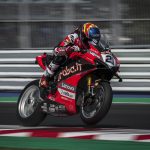 #ITAWorldSBK FP. Super Friday for Rinaldi who dominates the free practices. Redding finishes in sixth place after a complex dayPress 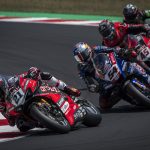 #ITAWorldSBK An extraordinary Rinaldi wins the Superpole Race and finishes second in a spectacular Race-2. Redding has to settle for fourth place.Press