Bautista tops the first day of action of the Dutch Round in Assen. Rinaldi closes 7th. Convincing P3 for Bulega in the WorldSSP free practices.

The Aruba.it Racing – Ducati team felt extremely positive about Friday’s free practice session at the Dutch Round, the second leg of the 2022 WorldSBK season.

At the TT Circuit in Assen, Alvaro Bautista proved himself already at ease with his Ducati Panigale V4 R, finishing second in FP1 before taking a clear lead in FP2 (1’34.382), almost three tenths ahead of Rea (Kawasaki).

It was a positive Friday for Michael Rinaldi too, especially in light of the progress made in FP2. In the afternoon the Italian rider was able to lap more consistently, lowering his morning time by two tenths to close with a best of 1’35.016 (P7 in the combined standings)

Alvaro Bautista (Aruba.it Racing – Ducati #19)
“It was a very positive day. I haven’t ridden a Ducati at this circuit for three years so it was important to get some good feeling back and work well on the setup to get the best feeling back. We also worked well with the tyres to understand what the right choice is for tomorrow. We arrive at Race 1 with a lot of confidence”.

Michael Rinaldi (Aruba.it Racing – Ducati #21)
“I’m satisfied especially with the progress we made in the afternoon. Despite the fourth-place finish, in FP1 I couldn’t find the right feeling with the bike. This afternoon things went better, even though the numbers say otherwise. We’re not very close to the guys in front yet, but I’m confident that we can make further progress tomorrow”.

After making the most of this morning’s free practice to get to grips with his Ducati Panigale V2, Nicolò Bulega pushed hard in FP2, finishing in third position (1’38.035), just 7 thousandths behind Aegerter (Yamaha) and 77 thousandths behind Oncu (Kawasaki). 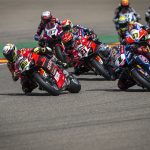 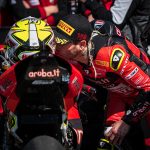 Bautista fights for the victory until the very last corner. Rinaldi crashes after a great comeback (from P12 to P5). Second podium in a row for Bulega (P3) in WorldSSPPress