Aruba.it renews its agreement with Ducati for the WorldSBK championship and lands in MotoGP

The two factory Ducati Panigale V4 R bikes will wear the colours of Aruba.it in the World Superbike Championship for another two years: a collaboration that began in 2015, when the Aruba.it Racing – Ducati Team became the official team of the Borgo Panigale-based manufacturer in the World Championship for production-derived motorbikes, and which will surely continue until it celebrates its tenth anniversary in the 2024 WorldSBK season.

Moreover, from 2022 on, the partnership between Aruba.it and Ducati will be further strengthened. Aruba.it will in fact be the title sponsor of the Desmosedici GP that will see Michele Pirro, Ducati test rider, as a wild card competing in three rounds of the MotoGP World Championship: the Gran Premio d’Italia at Mugello (27-29 May), the Gran Premi de Catalunya at Montmeló (3-5 June) and the Gran Premio di San Marino e della Riviera di Rimini at Misano (2-4 September).

Stefano Cecconi (CEO Aruba S.p.A. and Team Principal Aruba.it Racing – Ducati)
“The relationship with Ducati is a strong bond in the Superbike World Championship and a fruitful collaboration between the two companies. We are proud to represent Ducati on circuits around the world and to have renewed the agreement that will allow us to continue this adventure at least until the end of the 2024 season. From this season, participating as a wild card in three events of the MotoGP World Championship is for us a source of further satisfaction and it underlines the strong connection with the Borgo Panigale company. Not only it will be a new showcase for Aruba.it, but it will give us the chance to undertake a new fascinating challenge with the same commitment and professionalism that has distinguished us so far in World Superbike”.

Claudio Domenicali (Chief Executive Officer Ducati Motor Holding S.p.A.)
“We are truly satisfied with the long-term partnership that has bound us to Aruba.it for eight years. It is a company that, like Ducati, represents Italian excellence driven by innovation. The agreement extension until 2024 confirms the quality of a partnership which has gone from strength to strength year after year from a business and sporting point of view. In addition to the extensive commitment to World Superbike, this season includes the new challenge in the Supersport World Championship and the satisfaction of seeing a Ducati racing in MotoGP with the Aruba.it Racing team colours that, for all the fans, are the natural colours of the official Panigale V4 R competing in the Superbike World Championship”. 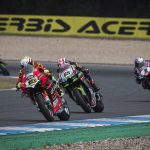 Bautista second at the end of a spectacular Race-2 decided at the last corner. Rinaldi settles for the eighth place. Bulega involved in a crash three laps from the end in WorldSSPPress 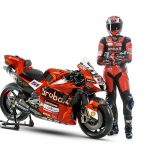 Everything is set at Mugello for the Aruba.it Racing team’s first MotoGP wild card with Michele Pirro and the Ducati Desmosedici GPPress