Aruba.it Racing – Ducati team on the starting blocks in Thailand for Round 2 of the Superbike World Championship

After rewriting history at Phillip Island, with a triumphant debut for Álvaro Bautista and the new Panigale V4 R, the Aruba.it Racing – Ducati team will be back in action this weekend at the Buriram circuit in Thailand for the second round of the Superbike World Championship scheduled for 15-17 March. Due to its particular layout and the torrid heat present in south-east Asia, the Buriram track undoubtedly represents a tougher proving-ground for the two men in the Italian squad, Álvaro Bautista and Chaz Davies. For the Spanish rider it will however not be a brand-new circuit, as the 34-year-old already took part in the MotoGP race last October, when he finished in eighth place. Team-mate Chaz Davies, following a difficult start to the season, has yet to express his true potential, but he is convinced he can make a major step forward by improving his performance on a track where he won last year. The Aruba.it Racing – Ducati team will be out on track on Friday morning at 10.30 local time (CET +6) for the first free practice session of the weekend. Álvaro Bautista (Aruba.it Racing – Ducati #19) – 1st (62 points)“Australia was a dream weekend and I couldn’t have asked for a better start in World Superbike. In Thailand I got a good result last season in MotoGP, so I’m feeling confident but Buriram is a track that has different characteristics to Phillip Island because there are more mixed sectors. For sure our rivals will be tough to beat, so we have to remain focussed and work really hard during the weekend. Anyway we will go to Thailand with the same mentality, I know the right feeling with the bike now so I will try and find it there as well. The Panigale V4 R is still a completely new bike, and the potential is high but we’ve got a lot of work to do to get it to 100%. I don’t know if Buriram is a Ducati track or not, we’ll just have to see what happens.” Chaz Davies (Aruba.it Racing – Ducati #7) – 8th (15 points)“The next race is Thailand, where I think we’ve probably got a bigger bank of information now so that’s something to work on. As for me, from a comfort point of view and understanding the bike, I’m going into Thailand knowing it much better than what I did when I turned up at Phillip Island, which is positive. We had a win and a third place last year which were good results so it shows we’ve got pace there, it’s just a matter of getting the bike in the ballpark. I’m looking forward to Thailand and I think that we can do a lot better than what we did in Australia as long as we can put the information to good use.” The Chang International CircuitDesigned by the German architect Hermann Tilke, the Chang International Circuit opened its doors in 2014 and this year will be the fifth time the circuit hosts a round of the World SBK championship. Situated around 400 km north-east of the capital, Bangkok, the city of Buriram in the state of the same name, literally means the ‘city of happiness’, and its hot and humid climate is a typical characteristic of its South-East Asia location. The 4.554 km track incorporates 12 turns and its facilities can accommodate more than 100,000 people, with several grandstands around the circuit offering a virtually complete view for fans. 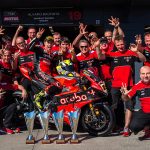 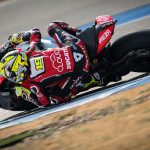