The second round of the Superbike World Championship, which took place this weekend at the Buriram circuit in Thailand, saw total domination by Aruba.it Racing – Ducati’s Álvaro Bautista, who won both races today: The Superpole Race, shortened by four laps following an incident, and then Race 2. The 34-year-old Spanish rider scored his sixth successive victory by clearly getting the better of Rea and Lowes in the Superpole Race, while in Race 2 he immediately broke away from the field, leaving his two rivals to fight it out for second, and then powered to the chequered flag with a ten-second advantage. It was not such a positive Sunday for Chaz Davies, who finished eighth in the Superpole Race, while in Race 2 he was forced to retire due to a technical problem on his Panigale V4 R. Despite this setback, the 32-year-old from Wales showed good progress, especially today, which is a real confidence booster for the upcoming races. With six wins to his name, Bautista is now leading the championship with 124 points, 26 more than Rea, while Davies lies in eleventh place with 18 points. The next World Superbike round will take place in three weeks’ time at the MotorLand Aragón circuit in Spain, from 5 to 7 April. Álvaro Bautista (Aruba.it Racing – Ducati #19) – 1st / 1st  “Three wins, three fastest laps and Superpole means that it has been a perfect weekend for me! We knew that it was going to be an important race because Kawasaki have won here so many times, but the whole team worked well with the bike over the weekend and it all came good. It wasn’t easy however because the Panigale V4 R is new everywhere we go and everything has to be discovered from scratch. Right from the beginning I had great confidence with the bike and only made small adjustments for the set-up we know. I just want to say thanks to my team and all the people in Ducati because they have done a fantastic job, I’m so happy! Now we have some time to rest before we go to my home race. I’m really looking forward to that and can’t wait to race at Aragón in front of my Spanish fans.”Chaz Davies (Aruba.it Racing – Ducati #7) – 8th / DNF“I’m obviously disappointed not to have been able to finish the race and see the true potential that we had today especially after the progress we made this morning. Regarding the technical problem, after feeling something was a little bit amiss when I lost some speed, I decided to save the engine and think about the season ahead. It was disappointing not to capitalize on our improvement, because today I had a good race pace and the feeling with the bike was much better. We’ve got some clear ideas on the direction to take and there’s some light at the end of the tunnel. Now we have the test at Aragon before the race, which is a good opportunity for us to make some more gains.” Stefano Cecconi (Aruba.it Racing – Ducati Team Principal)“We are very happy to have brought home these fantastic results in the two overseas races, which for a number of reasons are very particular. Now we can’t wait to go to Aragón where we’ve got all the markers to be able to face up to our rivals and understand how everyone is shaping up. We’re happy for Álvaro but at the same time disappointed that Chaz had an unlucky weekend, even though the improvements seen during the races give us confidence that we are now going in the right direction.” Marco Zambenedetti (Ducati Corse Track Technical Coordinator)“We came to Buriram knowing full well that we were racing on a track without reference markers, both because of the layout and for the extreme climate, and to verify if all the work we did in Australia was a good starting-point. We were able to keep a high competitive level with Álvaro from the start of Friday, which means that the bike is already suitable for his riding style albeit on different tracks. As for Chaz we continued to work methodically and we could see the results during the weekend with a constant improvement on his part. Unfortunately, because of a technical problem in Race 2 he was unable to score a result that was within possible reach. We’ll continue to work hard and will try again at Aragón, certain that we have an increasingly competitive package for both riders.” 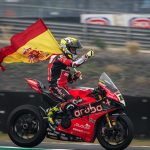 Fourth win of the season for Álvaro Bautista after a terrific scrap with Rea. Davies crashes but rejoins to finish fifteenthPress 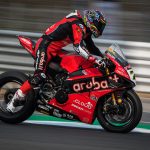 The Aruba.it Racing – Ducati team heads back to Europe for Round 3 of the Superbike World Championship at the MotorLand Aragón circuit in SpainPress