Aruba.it Racing – Ducati prepares for the halfway point in the championship and its second home race – the Riviera di Rimini Round – which will take place this weekend at the Misano World Circuit

After the Jerez weekend, which saw two wins and a crash for Álvaro Bautista in front of his home crowd, as well as some unexpected difficulties for team-mate Chaz Davies, the Aruba.it Racing – Ducati team arrives at Misano Adriatico for the seventh round of the season out of 13 and the midpoint of the championship.With 13 wins to his name this season, Bautista continues to keep a firm grip on the championship standings with 300 points and a margin of 41 over his closest rival Rea (Kawasaki). For the 34-year-old from Talavera de la Reina this will be his first race ever with a Superbike machine at Misano, but he knows the Adriatic Riviera track well having raced there in MotoGP ever since 2010.Team-mate Chaz Davies, who in his lengthy SBK career has never actually triumphed at Misano, will have another chance to take his first win on board the Panigale V4 R and break a non-winning streak that has lasted since April 2018.Both men completed two days of group testing at this track just before the Jerez round, but on that occasion the conditions weren’t particularly good; instead for this weekend summer weather and high temperatures are expected.The Superbike World Championship returns to action therefore on the track dedicated to Marco Simoncelli, where out of 52 races held so far, Ducati riders have won 29 times: on ten occasions (the last one of which was in 2011 with Carlos Checa) they have scored a double win.The Aruba.it Racing – Ducati team will be out on track on Friday at 10:30 CET for the first free practice session, while the weekend schedule sees Race 1 take place at 14:00 on Saturday, the Superpole Race at 11:00 on Sunday, followed by Race 2 at 14:00.Álvaro Bautista (Aruba.it Racing – Ducati #19) – 1st (300 points)“It was a pity about my crash at Jerez, but as I said at the time, that’s racing, so there’s no point in dwelling on it too much! Now we look forward to the next race in Misano, where we did some tests a few weeks ago. Although the conditions weren’t great, we managed to get some references for this weekend. I’m looking forward to trying to keep the same feeling with the Panigale V4 R and continue the good work we’ve done so far. Misano is a second home race for the Aruba team and Ducati, and we will for sure have a lot of fans to support us.”Chaz Davies (Aruba.it Racing – Ducati #7) – 8th (94 points)“We tested at Misano before Jerez, but conditions were a lot different to what we expect this weekend, so we’re not under any illusions that it’s going to be particularly easy there. Despite the results, I feel like with the knowledge from Jerez, we made a little step forward. We finally found something in the longer and faster corners which Misano also has so I’ve got to be optimistic. Before the crash, I was in the fight for the podium again so I feel it’s getting better. It’s still taking longer than I would have liked to get to grips with the Panigale V4 R but hopefully from Misano we can keep progressing.”The Misano World Circuit Marco Simoncelli Along with circuits such as Phillip Island, Assen and Donington this is one of the ‘classic’ World SBK venues with the championship having visited the Italian track almost every year since 1991, the only exceptions being 1992 and 2013. The first time WorldSBK raced at Misano was in 1991 with Doug Polen winning both races from pole on his Ducati en route to the first of his two World titles. The late Marco Simoncelli was from the nearby town of Cattolica and the local region has produced a number of the sport’s top names, including Valentino Rossi, Andrea Dovizioso and Marco Melandri.Circuit Record: Sykes (Kawasaki), 1’33.640 (162.47 km/h) – 2018Fastest Lap: Rea (Kawasaki), 1’34.720 (160.62 km/h) – 2015Track Length: 4.226 kmRace Distance: 2 x 21 laps (88.746 km), 1 x 10 laps (42.260 km)Corners: 16 (6 left, 10 right)2018 ResultsRace 1: 1. Rea (Kawasaki); 2. Davies (Ducati); 3. Laverty (Aprilia)Race 2: 1. Rea (Kawasaki); 2. Van der Mark (Yamaha); 3. Melandri (Ducati)Álvaro BautistaBike: Ducati Panigale V4 RRace Number: 19Age: 34 (born on 21 November 1984 in Talavera de la Reina, Spain)SBK Races: 16First SBK Race: 2019 Phillip IslandWins: 13First Win: 2019 Phillip IslandPole Positions: 3First Pole: 2019 BuriramWorld Titles: 1 (2006 125cc)Chaz DaviesBike: Ducati Panigale V4 RRace Number: 7Age: 32 (born on 10the February 1987 in Knighton, UK)SBK Races: 192 First SBK Race: 2012 ImolaWins: 29First Win: 2012 NürburgringPole Positions: 6First Pole: 2015 Laguna SecaWorld Titles: 1 (2011 Supersport)

Aruba.it Racing – Ducati prepares for the halfway point in the championship and its second home race – the Riviera di Rimini Round – which will take place this weekend at the Misano World Circuit2019-06-192019-06-19https://www.arubaracing.it/wp-content/uploads/2018/07/logo_aruba_racing.pngAruba Racing - Ducati Teamhttps://www.arubaracing.it/wp-content/uploads/2019/06/foto_sbk_misano2019.jpg200px200px
ARUBA.IT RACING – DUCATI 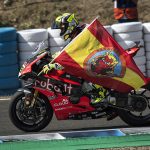 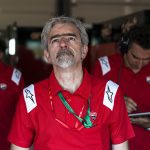