Qatar: Chaz Davies puts in a great run through the field to finish second at the flag, fourth place for Álvaro Bautista

The first race in the Qatar WSBK Round, which is taking place this weekend at the Losail International Circuit, saw a great performance from Chaz Davies (Aruba.it Racing – Ducati), who finished in second place after a splendid ride through the field from twelfth place on the grid. After starting well from the fourth row, the Welshman crossed the line at the end of the opening lap in fourth place, and he then kept up an excellent pace that took him to a couple of seconds from winner Rea (Kawasaki) at the end of the scheduled 17 laps.Team-mate Álvaro Bautista, who wasn’t able to find the right feeling with his Panigale V4 R, was in a bit more difficulty in the first race. After a bad start from seventh place on the grid, and despite good pace in the second half of the race, the Spanish rider had to settle for fourth overall. Tomorrow, Saturday 26th October at 15.00 CET, the Superpole Race will be held over a distance of 10 laps, while the 17-lap second race will get underway at 19.00 CET.Chaz Davies (Aruba.it Racing – Ducati #7) – 2nd “It was a really good race actually, much better than expectations, especially after Superpole which was a bad showing, because I just wasn’t able to get the best out of the fresh rear tyre. In the race I got a good start into the first corner, and then the rest was just solid. I had really good pace, I was smooth and clean, trying to get a tenth of a second here and there and see if I could be in the mix with Jonathan come the end of the race. Unfortunately, I just used that little bit extra more tyre to keep me in the fight in the final stages. I’m pretty happy with the result, but I feel we can work on our package a bit and maybe up our pace tomorrow.”Álvaro Bautista (Aruba.it Racing – Ducati #19) – 4th “Today was a difficult day because already in yesterday’s practice sessions I wasn’t able to find a good feeling with my Panigale V4 R. Today we made some changes to the set-up but unfortunately they didn’t work as expected. After a few laps, with the tyre wear, the bike started to move about in the rear, and as a result I was struggling to keep the right lines. In addition, I lost a few places at the start: at the first corner I found myself on the outside losing ground to the riders who were on the inside. Despite these difficulties I did my best to get back up to fourth place, but wasn’t able to close the gap to the podium battle. I think I managed to get the best possible result and we’ll try and improve tomorrow.” 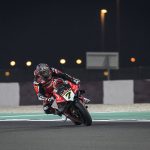 World Superbike in Qatar: a good start to the Losail weekend for the teamPress 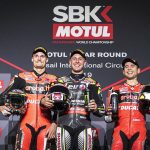 Aruba.it Racing – Ducati end the season with a double podium in Race 2Press