Positive feelings for Scott Redding and Chaz Davies on the first day of free practice at Jerez.

Scott Redding and Chaz Davies proved to have arrived in the best possible conditions at Jerez for the second round of the 2020 WorldSBK season. On a Friday characterized by great heat and a surprising balance in terms of lap times, the two Aruba.it Racing – Ducati riders were consistently in the top positions in both FP1 and FP2, finishing fifth and sixth respectively in the combined standings after working on the race pace with satisfactory results.
Scott Redding finished the FP2 in P2 setting his best lap time at the end of a virtual long run on a heavily used tyre as Chaz Davies also worked on the race distance at a convincing pace. The appointment with the time attack is scheduled for the Superpole tomorrow at 11.00 am.

Scott Redding (Aruba.it Racing – Ducati #45)
“It’s been a very good day even though the conditions are really extreme, especially for the tyres. I tried to work in this direction this afternoon and we had positive results. I think that this weekend it will be very important to manage not only the tyres but also our body as we’ll have three races and they will all be particularly demanding. I am very confident though: I feel I am in the best possible condition”.

Chaz Davies (Aruba.it Racing – Ducati #7)
“I think today we have seen the improvements we made in the last two tests in Misano and Barcelona. The bike has worked pretty well and the feeling is extremely positive. The objective for this weekend? I want to fight for the podium in every race. The pace is good even if in the race it is always a different story. In FP3 tomorrow morning we will continue to work to improve the feeling and get to the Superpole in the best conditions”. 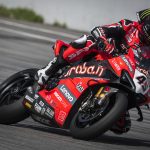 Aruba.it Racing – Ducati team back on track for the second round of the 2020 WorldSBK season at Jerez de la Frontera (Spain).Press 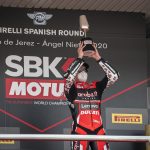