It was an intense two-days testing for the Aruba.it Racing – Ducati Team at the Circuit de Barcelona-Catalunya with Scott Redding and Michael Rinaldi (170 and 172 laps completed in total) finishing respectively in second and fifth position.

On the first day of testing, Scott Redding and Michael Rinaldi worked intensively on new solutions in terms of electronics and set put.

Today the two Aruba.it Racing – Ducati riders continued the development of their Panigale V4 R machines, making concrete progress in terms of both feeling and performance. In the final time attack, Scott Redding put in a convincing lap that allowed him to finish in second position, just one-tenth off the best lap registered by Rea (Kawasaki).

After setting a solid lap-time with race tyres, Michael Rinaldi was unable to get the best out of his qualifying tyre and finished fifth.
The Aruba.it Racing – Ducati team will be back on track in just a few days at the Motorland circuit in Aragon (Spain) for the private test scheduled for Monday 12th and Tuesday 13th April.

Scott Redding (Aruba.it Racing – Ducati #45)
“We’ve worked a lot to try and improve the weak points of our bike, especially in long corners. We’ve also tried to improve both the feeling and the grip. I can say that we’ve made some progress in this direction but it’s clear that we’re still missing something. All things considered, I’m satisfied because I felt good on the bike”.

Michael Rinaldi (Aruba.it Racing – Ducati #21)
“In these two days, we focused on several areas. We had a lot of things to try and I have to admit that in the end, we got the job done. We encountered some difficulties, the same ones that Scott experienced, and this can be an advantage because it will allow Ducati to work in the same direction. I’m very happy with the race pace, but I still need to improve on my fast lap time”. 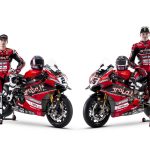 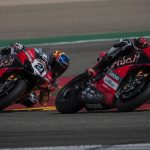