Race-1 of the French Round, eighth event of the 2021 WorldSBK season, ends with the fourth place of Michael Rinaldi, great protagonist in the early laps, and the P12 of Scott Redding who – after a difficult qualifying session – never manages to find the conditions to be competitive.
Here are the highlights of Saturday at the Magny-Cours circuit (France).

P7 – Michael Rinaldi opts for the three-run strategy and in the last time attack, he is able to push with confidence. Too bad for a negative fourth sector in which he loses precious tenths that would have allowed him to easily conquer the second row.
P8 – Despite a FP3 finished in first position, Scott Redding is not able to get the best out of the two qualifying tires and he has to settle for the eighth position on the grid.

P4 – Michael Rinaldi’s start is sensational and after a few corners, he reaches the second position, ending the first lap in third. Lowes’ (Kawasaki) attack comes soon but Rinaldi’s race pace is encouraging. On lap 12, however, the number 21 cannot defend himself from Locatelli (Yamaha) finishing under the checkered flag with a positive P4.

P12 – Scott Redding‘s race is difficult since the start. The English rider complains of strong grip problems that force him to make some mistakes in braking. Despite all, Redding tries to push to recover positions and points.
During the fight for the 8th position he falls without consequences and he is able to resume the race, crossing the finish line 12th.

Michael Ruben Rinaldi (Aruba.it Racing – Ducati #21)
“It was a pretty positive race also because we are coming from a quite difficult period. We decided to work in a different way during this weekend and I think this new approach has paid off. Unfortunately, the rear grip was never the best. In the end, I wanted to fight for the podium but in the last five laps, the tire dropped a lot. We will try again tomorrow”.

Scott Redding (Aruba.it Racing – Ducati #45)
“It was a very tough race. I never had any grip both on the front and on the rear. I tried to hold on until the end even though the feeling was not the best. Then I crashed. In conditions like these, when the temperature is high but not very high, we have difficult problems to solve. Anyway, I hope to do better tomorrow in terms of results”. 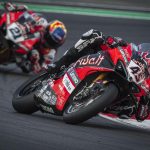 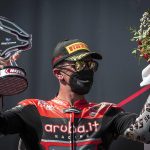