#ARGWorldSBK Race-1 Precious podium for Rinaldi at the end of a solid race. Redding crashed at the first corner, re-joined the race and finished in ninth.

Michael Ruben Rinaldi is the protagonist of an extremely solid race thanks to an excellent pace that allows him to conquer the podium. Scott Redding conquers the Pole Position but his race is compromised at the first corner.
Here are the high lights of Race-1 of the Argentinean Round, twelfth round of the 2021 WorldSBK season.

P3 – Starting from the third row, Michael Rinaldi quickly recovered three positions. His race pace grew lap by lap and allowed him to attack first Locatelli (Yamaha) and then Lowes (Kawasaki). From the middle of the race, Rinaldi accelerated further and on lap 11 he took third place, overtaking Bassani (Ducati) and then easily conquering a solid podium.
P9 – Scott Redding got his first pole position of the season but he crashed at the first corner. The British rider rejoined the race fighting stubbornly to take a few points, eventually securing the 9th position.

Michael Ruben Rinaldi (Aruba.it Racing – Ducati #21)
“It’s clear that the result is good but I have some regrets about the qualifying session that compromised the first part of the race. However, I must underline the work done with the team that has allowed us to have a very competitive pace. I will try to push hard tomorrow morning in the Superpole Race to start in a better position in Race-2”.

Scott Redding (Aruba.it Racing – Ducati #45)
“We took a good pole position but I have to admit it was a bit unexpected. I knew I had a good pace but maybe not enough to stay in the lead for the whole race but enough to allow me to fight with the front group. Unfortunately in the first corner, I lost the rear. It was a really strange crash: we will have to study the data to understand what happened”.

#ARGWorldSBK Race-1 Precious podium for Rinaldi at the end of a solid race. Redding crashed at the first corner, re-joined the race and finished in ninth.2021-10-162021-10-16https://www.arubaracing.it/wp-content/uploads/2018/07/logo_aruba_racing.pngAruba Racing - Ducati Teamhttps://www.arubaracing.it/wp-content/uploads/2021/10/ap18460.jpg200px200px
ARUBA.IT RACING – DUCATI 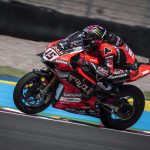 #ARGWorldSBK FP. Convincing Friday for Redding and Rinaldi who finished the free practices in 2nd and 4th position respectively.Press 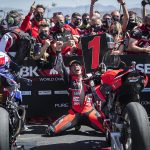 #ARGWorldSBK Scott Redding masters Race-2 after the 2nd place in Superpole Race. Michael Rinaldi tries his best, but he has to settle for 5th.Press