The Pirelli Indonesian Round marked the end of the 2021 WorldSBK season for the Aruba.it Racing – Ducati team, which saw Scott Redding and Michael Ruben Rinaldi finishing respectively third and fifth in the Superbike World Championship, won by Toprak Razgatlioglu (Yamaha).

The cloudburst that hit the Mandalika International Street Circuit in Lombok (Indonesia) early Saturday afternoon forced the race direction to cancel all activities and therefore reschedule Race-1 in place of the Superpole Race. The same situation was repeated a few moments before the start of Race 2, first postponed for an hour and then run regularly over 12 laps.

On an intense Sunday Scott Redding finished twice on the podium, third in Race 1 and second in Race 2.
For Michael Ruben Rinaldi, however, it was a weekend made particularly difficult by the technical issue that occurred in Saturday’s Superpole: after the first time attack with the X tyre, the Italian rider couldn’t return on track to take advantage of the two Q tyres available.

P3 – Despite a less-than-stellar start, Scott Redding takes second place in turn one. Over the first few laps he studies the podium group of Razgatlioglu (Yamaha), Rea (Kawasaki) and Bassani (Ducati). Halfway through the race Redding startes to push and within two laps he is in the lead. The drop of the front tyre, however, is evident and does not allow him to fight for the victory, finishing in third place.
P12 – Forced to start from the fifth row (P14) after a technical problem in qualifying, Michael Rinaldi gets off to a great start and immediately recovers 7 positions before attacking Bassani to take sixth place. In the following corner, however, he makes a mistake that compromises his chances of fighting with the group in front.

P2 – Scott Redding has a great duel with Rea. In the last lap Scott takes the lead but Rea’s reaction comes with three corners to go.
DNF – Michael Rinaldi makes a great comeback. His aim was to finish ahead of Locatelli (Yamaha) to take fourth place in the final World Superbike championship standings. Rinaldi manages to complete the chase with 3 laps to go but while trying to create a gap with he loses control of his Ducati Panigale V4R and crashes. After returning to the box, in agreement with the medical staff, Michael underwent further precautionary checks.

A big thank you and good luck to Scott Redding, who over the past two years has given great emotions to the Aruba.it Racing – Ducati team. For the British rider 12 victories, 37 podiums which allowed him to get a second and a third place finish in the final standings of the 2020 and 2021 WorldSBK seasons.

265 races in WorldSBK, 28 victories (32 in total) and 89 podiums (99 in total) achieved in his eight consecutive seasons riding a Ducati, finishing as runner up three times and twice in third place. These are the extraordinary numbers of Chaz Davies, who rode his last Superbike race today. A very strong bond and great feeling with the Aruba.it Racing – Ducati team. Chaz Davies will always have a special place in the hearts of the team and all Ducatisti. Thank you Chaz!

Scott Redding (Aruba.it Racing – Ducati)
“I had a lot of fun today, especially in Race 2 in a good battle with Jonathan. I want to thank the team for these two years. The Aruba.it Racing – Ducati team and Ducati represent a big family for me. I thank everybody, from my team in the pit, to the guys in the hospitality area, to whoever worked at Borgo Panigale to put me in a position to win. It’s a very emotional moment for me, but I’m calm because I know I’ve given everything for this group that has welcomed me in an extraordinary way. A new adventure awaits me but without a doubt, the whole team will always have a special place in my heart”.

Michael Rinaldi (Aruba.it Racing – Ducati)
“I’m really sorry for the way the race ended. I gave my best to be able to take fourth place in the final classification. Starting from the fifth row wasn’t easy but I was patient and made up positions lap after lap. In the final part of the race, after I managed to complete the comeback, I tried to push to create a gap and defend myself from attacks but I lost the rear, without warning. I thank the team for the work they have done this season. We have gained a lot of experience and this will definitely be an advantage for 2022”. 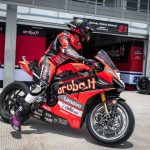 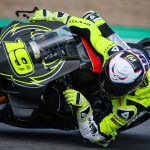 #JerezTest Bautista back on the Ducati Panigale V4R as Bulega gets on the Aruba.it Racing WorldSSP Panigale V2 for the first timePress