#JerezTest Bautista back on the Ducati Panigale V4R as Bulega gets on the Aruba.it Racing WorldSSP Panigale V2 for the first time

A few days after the final round of the 2021 WorldSBK season – held on Lombok island (Indonesia), at the Mandalika International Street Circuit, the Aruba.it Racing – Ducati team got back on track for the final 2021 test at Jerez de la Frontera (Spain).

Alvaro Bautista got back on the Ducati Panigale V4R, with which he finished runner-up the 2019 WorldSBK season, achieving 16 wins and 24 podiums, while Michael Ruben Rinaldi was forced to miss the test due to a crash sustained in the final lap of Race 2 of the Indonesian Round.

After an afternoon session on Day 1 dedicated to ergonomics and familiarizing himself with the Panigale V4R, on Day 2, Bautista and his team worked intensively on the bike set-up, completing 96 laps with the best time of 1’39.119.

The private test at Jerez de la Frontera also saw the debut of Nicolò Bulega on the Ducati Panigale V2. The Italian rider, who will defend the colours of the Aruba.it Racing team in the 2022 WorldSSP Championship took advantage of the three sessions to gain confidence with the new bike and get to know his new team.

#JerezTest Bautista back on the Ducati Panigale V4R as Bulega gets on the Aruba.it Racing WorldSSP Panigale V2 for the first time2021-11-252021-11-25https://www.arubaracing.it/wp-content/uploads/2018/07/logo_aruba_racing.pngAruba Racing - Ducati Teamhttps://www.arubaracing.it/wp-content/uploads/2021/11/dcr61678-scaled.jpg200px200px
ARUBA.IT RACING – DUCATI 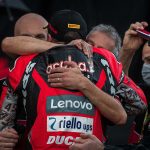 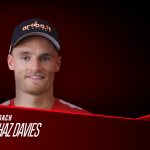 Chaz Davies to be the Riders’ Coach for the Aruba.it Racing – Ducati TeamPress