The Aruba.it Racing – Ducati team presents the new liveries of the Ducati Panigale V4R and Panigale V2 for the 2022 WorldSBK and WorldSSP season

The traditional bike unveiling and the official photo shoot marked the start of 2022 World SBK season for the Aruba.it Racing-Ducati Team at the World Misano Circuit, where Alvaro Bautista and Michael Ruben Rinaldi are getting ready for a two-day test.

The return of the Spanish rider – a standout in the 2019 season with his 16 victories, 11 in a row at the start of the season – represents the most important novelty, as do the liveries of the Ducati Panigale V4R: compared to the ones seen in action over the past three years, 2022 liveries show a renewed design.

Alongside Alvaro Bautista, the confirmation of Michael Ruben Rinaldi, outstanding protagonist of 2021 Misano Round, ready to make the final leap in quality in the next WorldSBK campaign.

The 2022 season of the Aruba.it Racing – Ducati team will kick off at Aragon (Spain) on the second weekend of April and will be presented through the “Season Launch” video, to be released on Thursday 7 April.

And the news doesn’t end there. Nicolò Bulega will make his debut at Aragon in the World Supersport Championship, riding the Ducati Panigale V2 of the Aruba.it Racing WSSP team. An engaging challenge that will see Ducati fighting with several teams in a championship that is getting growing interest and that promises to offer new emotions to fans all over the world in 2022 season.

Stefano Cecconi (CEO Aruba S.p.A. and Team Principal Aruba.it Racing – Ducati)
“We look at the 2022 WorldSBK season with high ambition and strong determination. The goal of our team is to always take a step forward, year after year, in terms of performance and results. This is the reason why we are proud to represent Ducati in the World Superbike Championship, feeling the presence and passion of the Ducatista people on every circuit. We have bet on Alvaro Bautista’s return and we want to fight with him a more exciting season than the 2019, which gave us great satisfactions after all. We firmly believe in Michael Rinaldi and we reckon he is ready to take that significant step forward after the steady growth he has shown so far. Moreover, as Aruba.it Racing, we will be protagonists of a new adventure with Nicolò Bulega and the Ducati Panigale V2 in the SuperSport World Championship. Another fascinating challenge that underlines our growing commitment. I would like to wish the best of luck to the riders and to all the members of our teams, whose sense of belonging makes us proud and pushes us to give more and more every year”.

Claudio Domenicali (Chief Executive Officer Ducati Motor Holding)
“We share values, skills, goals, targets with Aruba.it. Plus, we both believe in the importance of innovation and technology. Aruba.it is a strategic partner, on and off the track, and we are happy to start another season together in the WorldSBK Championship, the most important production-based racing Championship. The bikes our fans can buy are as close as possible to the bikes that race track like the Panigale V4 and, from this year,  the Panigale V2 that will make its debut in the World Supersport Championship. This is our philosophy of putting racing technology at the service of our passionate and sporty customers. The Aruba.it Racing – Ducati team is a perfect mix of experience and enthusiasm thanks to the return of Alvaro Bautista and the confirmation of Michael Ruben Rinaldi. I wish them and the whole team the best of luck for the 2022 season.”

Luigi Dall’Igna (Ducati Corse General Manager)
“The level of WorldSBK is growing every year, as well as the competition. Obviously, this doesn’t scare us, and on the contrary, it pushes us to give more and more, work more carefully and focus on every single detail. In the 2021 World Championship, our team was the only one to have won at least one race with both riders, and this confirms the potential of the Panigale V4R. To achieve our most important goal, we rely on Alvaro Bautista’s return – who needs no introduction – and Michael Rinaldi’s desire to impress. In addition, in the 2022 season, we will also be competing in the World Supersport Championship with the Panigale V2. It’s a fascinating challenge that underlines Ducati’s deep commitment to the world of production-based racing.”

Alvaro Bautista (Aruba.it Racing – Ducati #19)
“I am very happy to be back in this fantastic team, with Aruba.it and Ducati. It feels like a real family to me and finding basically the team I worked with in 2019 has been of paramount importance. My feelings with the Panigale V4R were immediately very positive: I think the bike is even more balanced than the one I left. With such a competitive team and machine, obviously the goal is to fight for the title. I have more experience, I know the tyres and the format of the competition better, but it will still be crucial to learn from the mistakes of three years ago. Winter tests got me very excited and I can’t wait to get on track at Aragon”.

Michael Rinaldi (Aruba.it Racing – Ducati #21)
“The 2022 championship is about to start: it will be my second season with the official team even though I have been part of the Aruba.it family for many years now. This is why the time has come to reap the benefits we have sown so far. It will not be easy because the competition is very fierce but I believe that these years together can be a solid base to create something good. It will be a very important championship both for me and for the team and my future career could also depend on this season. I will certainly give my best and with the help of the team I am sure we can achieve important results. I’m very happy and I want to thank Aruba.it, Ducati and all the sponsors who have allowed me to take on this fascinating challenge”.

Nicolò Bulega (Aruba.it Racing WSSP Team #11)
“I’m very motivated for this new adventure. It’s a great opportunity for me and I feel I have all the requirements to do well. The tests have been very positive, I felt comfortable both with the Panigale V2 and with the team, which is very important to me. It’s going to be a tough season for sure and for this reason we need to put our heads together and try to get the most out of every single race”. 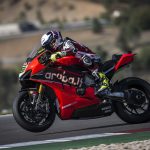 Two days of intense work for Bautista and Rinaldi in the first testing of the 2022 at Portimao. Bulega already at ease with the PanigaleV2Press 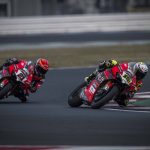