Exciting Race-1 for Bautista (P2) who fights for the victory until the last corner. Convincing 4th place for Rinaldi. Bulega finishes 5th after a precious comeback on his WorldSSP debut

The first Saturday of the 2022 WorldSBK season brought plenty of excitement to the Aruba.it Racing – Ducati team.

Firstly, the riders showed good teamwork in a convincing qualifying session (P2 for Alvaro Bautista and P4 for Michael Rinaldi) then they took part in an electrifying Race-1 at the Motorland circuit of Aragon (Spain).

Alvaro Bautista fought a spectacular duel first with Razgatlioglu (Yamaha) and then with Rea (Kawasaki). From the middle of the race, the battle with the Welshman got more exciting thanks to an endless series of overtakes and counter-overtakes. At the final corner, Bautista made a decisive attack but he was eventually unable to contain Rea’s response, finishing just 90 thousandths of a second behind him at the chequered flag.

Michael Rinaldi confirmed in the race the fourth place obtained in qualifying. The Italian rider stayed with the podium group until lap 10, trying to push to attack Razgatlioglu. In the end, however, his race pace was not enough to fight for the podium and he secures a valuable fourth place.

Alvaro Bautista (Aruba.it Racing – Ducati #19)
“I’m very very happy with this race. If have to be honest, winning wasn’t my only goal. After two years that weren’t easy, I needed to rediscover those sensations that you only get when you’re fighting for the win. I immediately felt that feeling which allowed me to try until the end. The battle with Toprak first and then with Jonathan was exciting. I had a lot of fun and I hope I was able to entertain my fans as well. We just need a small step forward for tomorrow”.

Michael Rinaldi (Aruba.it Racing – Ducati #21)
“I’m pretty happy with the way we started the season. I was sure I could have a good race and I felt good in the first few laps. Unfortunately, when the rear grip dropped, the feeling with the bike dropped and I couldn’t stick with the podium group. We already know what we can do to improve and for this reason I’m very confident ahead of tomorrow’s races”.

Nicolò Bulega‘s start (P4 on the grid after this morning’s qualifying) was not the best and compromised his chances of fighting for the podium. The Italian rider, however, had the merit of staying focused and after passing in 10th position at the first corner, he made up ground to finish fifth under the chequered flag.

Nicolò Bulega (Aruba.it Racing – Ducati WSSP Team #11)
“Unfortunately I made a mistake at the start by releasing the clutch in the wrong way. It’s something we have to work on to make sure it doesn’t happen again. In the first laps, I had a hard time overtaking the guys in front of me because we don’t have the same acceleration performance as our rivals. It a good fifth place, all things considered. Tomorrow we will try to do better”.

Exciting Race-1 for Bautista (P2) who fights for the victory until the last corner. Convincing 4th place for Rinaldi. Bulega finishes 5th after a precious comeback on his WorldSSP debut2022-04-092022-04-09https://www.arubaracing.it/wp-content/uploads/2018/07/logo_aruba_racing.pngAruba Racing - Ducati Teamhttps://www.arubaracing.it/wp-content/uploads/2022/04/dsc3832.jpg200px200px
ARUBA.IT RACING – DUCATI 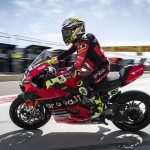 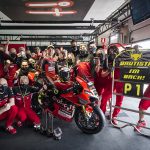 A stunning Sunday for Bautista who dominates both SPR and Race-2. Rinaldi twice P4. First historic podium for Bulega and the Panigale V2 in WorldSSPPress