The first day of testing at Aragon (Spain) ends with Bautista and Rinaldi in third and eleventh position respectively. Bulega tops WorldSSP

The first of two days of testing at the Motorland circuit in Aragon (Spain) ended with Alvaro Bautista in 3rd place and Michael Rinaldi in 11th.

It was a very peculiar day, characterized by extremely cold temperatures that prevented the riders from being able to take advantage of the first of the three daily sessions.
In the early afternoon, the track conditions improved, and the two Aruba.it Racing – Ducati riders were able to work more effectively with their Ducati Panigale V4 R.

Alvaro Bautista ended with the third fastest time (1’50.025), recorded on SC0 tyres. A crash – without particular consequences – on the last run forced him to postpone the time attack attempt until tomorrow.

After a good fifth place in the second session, Michael Rinaldi – also due to some issues – was unable to make an impact in FP3 closing with the 11th fastest time in the combined standings (1’50.632).

Alvaro Bautista (Aruba.it Racing – Ducati #19)
“We’ve been working a lot on the setup and electronics and we have been able to get some very interesting data. I’m really sorry for the crash on the last run. I went out for the first time with the second bike and, if I’m honest, I don’t know what happened. We will have to check the data to understand it better. Luckily there were no consequences. Anyway, I am confident about the pace we had with the SC0. Tomorrow we’ll also try the softer tires”.

Michael Rinaldi (Aruba.it Racing – Ducati #21)
“I can’t be satisfied with the way things went today. We weren’t able to find continuity on the track and that’s something we’ll talk about with the team to be able to do better tomorrow. Anyway, the feeling with the bike isn’t bad and that gives me confidence. Of course, we will have to work harder to be ready for the first round of the season”.

After being forced to skip the FP1 due to low temperatures, Nicolò Bulega showed to be at ease on the Ducati Panigale V2 of the Aruba.it Racing WSSP Team. The Italian rider completed 37 laps in the two-afternoon sessions, finishing in first place with the fastest time of 1’53.818.

Nicolò Bulega (Aruba.it Racing WSSP Team #11)
“It was a very complicated day because of the weather conditions. Luckily in the afternoon, we were able to work steadily, also because it was my first time on this circuit with the Ducati Panigale V2. We’re still a long way from the fastest times of this category at Aragon, but the feeling with the bike is growing and that’s positive”. 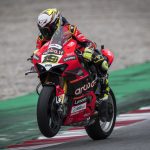 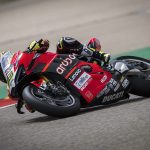