The first MotoGP race weekend for the Aruba.it Racing team ends with Michele Pirro‘s 18th place finish. On the day of Ducati‘s triumph with Francesco Bagnaia, Michele Pirro is incisive at the start but at the first corner he is forced to go wide to avoid contact.

Halfway through the race, the Italian rider is still in the fight to take points for the MotoGP world championship standings, but in the final laps, he fails to have an incisive race pace to bring home the result.

Michele Pirro (Aruba.it Racing)
“It was not an easy race. The feeling with the bike was not the best, especially under braking. It’s a shame because I was convinced I had the potential to bring home some points. Confidence remains high: we will try again next Sunday in Barcelona”. 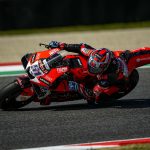 The Aruba.it Racing team back on track with Michele Pirro and the Ducati Desmosedici GP for the Gran Premi de Catalunya MotoGPPress