Alvaro Bautista, Michael Rinaldi and the Aruba.it Racing – Ducati team ready for the Catalunya Round in Barcelona (Spain)

After the French weekend at the circuit of Magny-Cours, the WorldSBK paddock has already landed in Barcelona (Spain) where, with Friday morning’s free practice, the Catalunya Round will get underway.

Alvaro Bautista arrives in Barcelona leading the World Superbike championship standings and with the aim of getting back to win points, after being forced to retire when he was in second position at the start of Race-2 at Magny-Cours.

After finishing second at the end of the same Race 2, two days ago Michael Rinaldi signed the renewal of his contract with the Aruba.it Racing – Ducati team until the 2023 season. The Italian rider will therefore want to celebrate this important milestone in the best possible way at a track that last year saw him triumph in Sunday’s Race-2.

Alvaro Bautista (Aruba.it Racing – Ducati #19)
“I can’t wait to race in Barcelona. I am very excited because this is a track that I like, on which I have done well in the past and where we had the chance to do two tests that gave us very positive indications. We have to work well from Friday and always stay focused so as not to make mistakes and in order to get the best result. The clash at Magny-Cours? After seeing the footage many times, my thoughts do not change and there is nothing more we can do about it. I’ve already said what I had to say so now we just have to look ahead”.

Michael Rinaldi (Aruba.it Racing – Ducati #21)
“I am very happy to have signed the contract extension with the Aruba.it Racing – Ducati team for next season. I think it could be a very important step for my career. I’m living a positive moment in which the feeling with the bike is constantly at a good level. I arrive in Barcelona after getting my best result of the season with second place in Race-2 at Magny-Cours and there’s no need to say that my confidence is very high. This is a circuit I like a lot and where I was able to obtain important results”.

Nicolò Bulega is back on the Ducati Panigale V2 of the Aruba.it Racing WSSP team after his podium finish in Race-2 at Magny-Cours.

Nicolò Bulega (Aruba.it Racing WSSP #11)
“I really like the Barcelona circuit and also compared to most of the other rounds, I can start this weekend already having some data to work on after the test we did at the beginning of the year. There is a lot of confidence and I hope I can be very competitive right from free practice.” 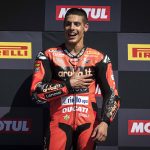 The Aruba.it Racing – Ducati team with Michael Rinaldi aboard the factory Ducati Panigale V4R also in the 2023 WorldSBK seasonPress 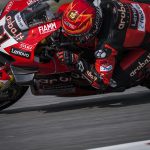 Rinaldi (P2) and Bautista (P4) protagonists in Friday free practices for Catalunya Round at Barcelona. Bulega third despite a difficult day in WorldSSPPress