The Pirelli Indonesian Round started in the right way for the Aruba.it Racing – Ducati team. Friday’s free practice, in fact, finished with Alvaro Bautista and Michael Rinaldi in first and third position respectively.

After using FP1 mainly to get to grips with the new asphalt at the Mandalika circuit, Alvaro Bautista‘s feeling with the Ducati Panigale V4R grew lap by lap in the second session, allowing him to close in on the lead with a 462 thousandths of a second advantage over Toprak Razgatlioglu (Yamaha).

Michael Rinaldi also had a very positive day, working well with his team despite the fact that track conditions, especially in FP1, were not the best. The Italian rider ended free practice in third place, nine tenths down on his team-mate.

P1 (1’33.626) Alvaro Bautista
“It was a very strange day. In FP1 we literally tried to put rubber on the track because with the new asphalt the grip was non-existent. In the afternoon things improved even though I have to say that the conditions are still not optimal: we only have a thight line with grip because the circuit is not yet perfectly rubberized. In any case we have collected a lot of data to try and improve further tomorrow.

P3 (1’34.590) Michael Rinaldi
“All in all I can consider this Friday quite positive. In fact we finished in third place on a track where I encountered several difficulties last year. I did a good lap, that’s true, but we still need to improve on the pace. In FP2 we managed to make an important step compared to the morning, but we will certainly need another one tomorrow to be able to fight for the podium”.

P1 (1’38.004) Nicolò Bulega
“I didn’t know the track and that’s why I struggled a bit in FP1 also because of the almost total lack of grip. In the afternoon the track improved a lot and I finally got my feeling back from the first part of the season. I’m back to riding the way I like to ride and that gives me a lot of confidence. I hope to have a good weekend. 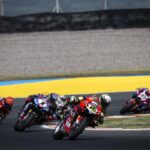 High expectations for the Pirelli Indonesian Round, 11th round of the 2022 WorldSBK seasonPress 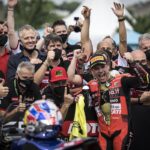