Álvaro Bautista takes another triple of wins at MotorLand Aragón. Chaz Davies steps onto the podium again with third place in Race 2

This weekend was a truly extraordinary and emotional one for the Aruba.it Racing – Ducati rider Álvaro Bautista, who with nine wins in a row continues his unbeaten run in his debut season in the production-based series. In front of his home crowd, the 34-year-old from Talavera de la Reina left his rivals trailing as he dominated both the 10-lap Superpole Race and the 18-lap Race 2 in the afternoon, winning both by a wide margin. The win in Race 2 was the 350th for Ducati in World Superbike ever since the start of the championship back in 1988. Team-mate Chaz Davies stepped onto the podium again today after disputing two gutsy and hard-fought races. After just missing out on third place in the morning’s Superpole Race, the 32-year-old from Wales scrapped with Rea and Haslam (Kawasaki) and Lowes (Yamaha) in the second race, and only a mistake at the start of the final lap denied him the chance of finishing second. With nine wins to his name, Bautista remains firmly in control of the championship standings on 186 points, 39 more than Rea, while Davies is in seventh place on 56 points. The next World Superbike round will take place in a few days’ time on the Assen TT circuit, from 12 to 14 April. Álvaro Bautista (Aruba.it Racing Ducati #19) – 1st / 1st   “It has been an extraordinary weekend for me. Winning three races here in Spain in front of my family, my friends and the Spanish fans was really great. In all three, I was able to make my own strategy, that is get a fast start and maintain my own pace. For sure the conditions in the three races were different, especially today in the Superpole Race which took place in the morning when it was very cold. Luckily it got a bit warmer for Race 2, but you could really feel the wind. Despite this, I was able to stay focussed, understand the situation on the track and push hard all the way. In the end we have won nine races out of nine and I’m so happy about that. The team has done an incredible job, we are on the right path and I’d like to thank Aruba, all Ducati and my team because the congratulations should also go to them.” Chaz Davies (Aruba.it Racing Ducati #7) – 4th / 3rd “It was a strong weekend for me, but I’m a bit disappointed about losing second place in Race 2. At the start of the last lap, I went in deep at Turn 1 and left the door open for Johnny, after which there wasn’t much chance of getting it back. At any rate, I was happy to back up yesterday’s result with another third position. It wasn’t easy in the wind, but we worked well this weekend to make big progress and I hope to build on that next weekend at Assen.” Stefano Cecconi (Aruba.it Racing – Ducati Team Principal) “It was another perfect weekend for Álvaro, which makes us really happy, but we are just as satisfied by the fact that Chaz got back on the podium and that he is getting more and more accustomed to the new Panigale V4 R. We hope that he will continue this string of positive results in the next few races.” 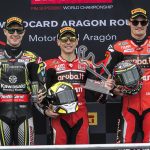 Seventh successive win for Álvaro Bautista in his home race at MotorLand Aragón; Chaz Davies back on the podium with an excellent third placePress 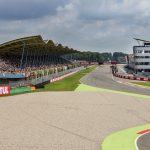 The Aruba.it Racing – Ducati team back on track this weekend with Álvaro Bautista and Chaz Davies for the Dutch round of the Superbike World Championship at Assen in the NetherlandsPress