The Aruba.it Racing – Ducati team back on track this weekend with Álvaro Bautista and Chaz Davies for the Dutch round of the Superbike World Championship at Assen in the Netherlands

The 2019 Superbike World Championship is continuing non-stop with the fourth round of the calendar about to get underway this weekend at the prestigious TT Assen circuit in the Netherlands, situated around 200 km from Amsterdam. A triple win, for the third time this season, by Aruba.it Racing – Ducati’s Spanish rider was important for a series of motives. Above all, it was the 350th win for the Borgo Panigale manufacturer in the production-based championship since it got underway in 1988; secondly, nine wins in the first nine races of the season equalled Hodgson’s winning streak from 2003, and finally Bautista is the first Spanish rider to win in his home country since Ruben Xaus in 2007. For the Panigale V4 R, but not for Bautista, the Assen circuit will be completely new but the points leader is confident he will also be able to express his full potential in the Netherlands. The Aragón Round was possibly a turning-point for his team-mate Chaz Davies, who stepped onto the podium in both races with two third places. Like Bautista, the 32-year-old Welsh rider knows the Dutch track well, and despite never having won there, he has finished second on three occasions with the twin-cylinder Panigale, in 2015 and 2016. The Aruba.it Racing – Ducati team will take to the track on Friday at 10:30 CET for the first free practice session, while the weekend programme will see Race 1 held at 14:00 on Saturday and the Superpole Race at 11:00 on Sunday, followed by Race 2 at 14:00. Álvaro Bautista (Aruba.it Racing – Ducati #19) – 1st (186 points)“Fortunately we don’t have a lot of time to rest between these races, and I prefer to get back on the bike again very soon after a weekend of wins like at Aragón. It will be a new track for us with this bike – like all the other circuits this season – but Assen is very different from the other tracks. Even though we don’t have much data, I know the place well because I’ve raced there in the past in other categories. The target is the same as always: work hard to get the best set-up in preparation for the races on Saturday and Sunday. The only unknown factor will be the weather conditions, but for sure we are extra-motivated for Assen.” Chaz Davies (Aruba.it Racing – Ducati #7) – 7th (56 points)“It was good to make progress at Aragón, so now I hope to be able to build on that next weekend and keep the momentum going. Assen is a different type of circuit from the others and requires a different riding style, but I’ve got more confidence now with the Panigale V4 R and me and the team have made a lot of progress with the set-up. It’ll be nice to try and get between Alvaro and the other guys, fight for the podium and demonstrate that the V4 R is strong with me on it as well.”The Assen TT CircuitAssen has held a Grand Prix race every year since it was inaugurated in 1949, first on closed roads and then from 1954 onwards on the track known as the Dutch TT circuit, while the first World Superbike event was run in 1992. The track carves its way between grassy embankments that house numerous viewing areas and in 2002 the circuit was brought up-to-date with some major restructuring work. It was then modified again at the end of 2005, but this time the track length of one of the calendar’s longest circuits was reduced from almost 6 km to 4.5.Circuit Record: Rea (Kawasaki) 1’33.505 (174.87 km/h) – 2017Fastest Lap: Rea (Kawasaki) 1’34.880 (172.34 km/h) – 2017Track Length: 4.542 kmRace Distance: 2 x 21 laps (95.382 km), 1 x 10 laps (45.420 km)Corners: 18 (6 left, 12 right) 2018 ResultsRace 1: 1. Rea (Kawasaki); 2. Van der Mark (Yamaha); 3. Davies (Ducati)Race 2: 1. Sykes (Kawasaki); 2. Rea (Kawasaki); 3. Van der Mark (Yamaha) Álvaro BautistaBike: Ducati Panigale V4 RRace Number: 19Age: 34 (born on 21 November 1984 in Talavera de la Reina, Spain)SBK Races: 9First SBK Race: 2019 Phillip IslandWins: 9First Win: 2019 Phillip IslandPole Positions: 2First Pole: 2019 BuriramWorld Titles: 1 (2006 125cc) Chaz DaviesBike: Ducati Panigale V4 RRace Number: 7Age: 32 (born on 10 February 1987 in Knighton, UK)SBK Races: 185 First SBK Race: 2012 ImolaWins: 29First Win: 2012 NürburgringPole Positions: 6First Pole: 2015 Laguna SecaWorld Titles: 1 (2011 Supersport) Updated Ducati World Superbike Statistics (1988-2019 Aragón) Wins: Ducati 350, Kawasaki 127, Honda 119, Yamaha 77, Aprilia 52, Suzuki 32, BMW 12, Bimota 11 Ducati winners: Carl Fogarty (55), Troy Bayliss (52), Doug Polen (26), Chaz Davies (25), Raymond Roche (23), Carlos Checa (22), Troy Corser, Noriyuki Haga, Neil Hodgson (16), Pierfrancesco Chili, Giancarlo Falappa (13), Rubén Xaus (11), Régis Laconi (10), Álvaro Bautista (9), Ben Bostrom (7), John Kocinski, James Toseland (5), Michel Fabrizio (4), Sylvain Guintoli, Lorenzo Lanzi, Marco Melandri (3), Shane Byrne, Mauro Lucchiari, Marco Lucchinelli, Stéphane Mertens (2), Anthony Gobert, Garry McCoy, Andy Meklau, John Reynolds, Jamie Whitham (1)

The Aruba.it Racing – Ducati team back on track this weekend with Álvaro Bautista and Chaz Davies for the Dutch round of the Superbike World Championship at Assen in the Netherlands2019-04-102019-04-10https://www.arubaracing.it/wp-content/uploads/2018/07/logo_aruba_racing.pngAruba Racing - Ducati Teamhttps://www.arubaracing.it/wp-content/uploads/2019/04/motogp-tt-assen-gp-olanda.jpg200px200px
ARUBA.IT RACING – DUCATI 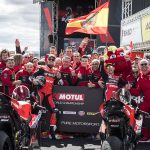 Álvaro Bautista takes another triple of wins at MotorLand Aragón. Chaz Davies steps onto the podium again with third place in Race 2Press 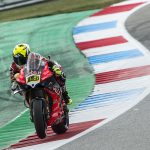