Spanish rider Álvaro Bautista put in a great performance today in the first free practice sessions of the Spanish World Superbike Round at the Jerez de la Frontera circuit in Andalusia. The 34-year-old from Talavera de la Reina was third in the morning’s FP1 behind the pair of official Yamaha riders, while in the afternoon, during the final part of the session, he made the best of a new tyre to carry out a time attack and set a time of 1’39.428, which earned him the provisional pole position.Team-mate Chaz Davies encountered a few more problems in adapting to the Jerez track today, and the Welshman was unable to go any higher than eleventh place in the two sessions. Despite today’s difficulties, the 32-year-old racer is confident he can move back up the field tomorrow in the third and final FP run and the qualifying session.Tomorrow the third and final free practice session will be held at 09:00 CET, followed two hours later at 11:00 by Superpole qualifying for the starting-grid line-up for Race 1, which gets underway at 14:00. Álvaro Bautista (Aruba.it Racing – Ducati #19) – 1st (1’39.428)“Today it was a very positive day, even though in the morning session we had a few problems with excessive tyre wear, probably because of the track conditions after the rain that fell overnight. In the afternoon therefore the work focussed on this aspect in particular. I really liked one of the new rear tyre solutions for its durability and consistency even though we used it over a distance that was longer than that of the race, at the same time also improving the feeling with the front over this morning. Tomorrow we’ll focus more on fine-tuning the chassis because I’m convinced we can make a further improvement and as a result another step forward.”Chaz Davies (Aruba.it Racing – Ducati #7) – 11th (1’40.637)“Today has been a bit tricky and we struggled a little bit with the front overloading all the time. We need to rebalance the bike to give me better feeling and speed on entry, connect the dots in the middle of the corner and keep the corner speed. Despite these problems, I’m fairly confident of improving tomorrow, it’s just that we were a bit too wide of the mark today. Jerez is a different track to Imola, and what works there doesn’t work here so we’re going to have to make some changes.” 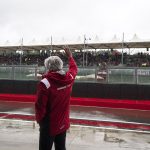 Race 2 cancelled due to the bad weatherPress 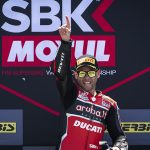 Álvaro Bautista scores his twelfth win of the season in Race 1 at the Jerez de la Frontera circuit in Andalusia.Press