Chaz Davies back on the podium in Race 1 at Laguna Seca with a good second place, Álvaro Bautista finishes in 17th place after a crash

The first race of Round 9 of the Superbike World Championship at the Laguna Seca Raceway reserved a few surprises for the Aruba.it Racing – Ducati team. After Superpole, which saw both riders qualify on the front row of the grid behind Rea (Kawasaki), Chaz Davies and Álvaro Bautista had all the right cards to run a good race.Unfortunately, only Chaz was able to get onto the podium, the Welshman finishing second in a race that was won by his Northern Irish rival, who led from start to finish.Bautista, who also powered away well from the front row, was fighting for the leading positions but unfortunately on lap 5 he was victim of a harmless crash at Turn 5. The Spanish rider managed to get back onto his bike again, but finished in 17th place.During this weekend, the Aruba.it Racing – Ducati team is taking part in the event with a special ‘old-style’ livery, to celebrate both the 25th anniversary of the 916 and the launch of the exclusive new Ducati Panigale V4 25° Anniversario, which evokes the 916 with which the multi-titled British rider Carl Fogarty, present at Laguna Seca as testimonial, won the 1994 Superbike World Championship title.Tomorrow the ten-lap Superpole Race will be held at 20.00 CET, with Race 2 starting at 23.00.Chaz Davies (Aruba.it Racing – Ducati #7) – 2nd “The race was a decent one. On the grid I went with a soft rear tyre, which felt good in the early stages, but in the later laps it was just hanging on and I wasn’t able to find stability or grip and I lost contact with Rea. Despite this I’m happy about the result and feeling good about the races tomorrow. We have definitely made a right step forward this weekend and it’s great to be back on the podium again, for me and for the guys in my team because they’ve worked so hard to try and get me a good feeling with the bike.”Alvaro Bautista (Aruba.it Racing – Ducati #19) – 17th “Unfortunately we’ve been hit by bad luck in the last few races. Today I crashed without really knowing the reason why, in addition at that moment I wasn’t even pushing to the limit. After a good start I was fighting with Chaz and Jonathan but I suddenly lost the front at Turn 5 and crashed out. I feel pretty bad about it because I think I could have had a chance of a win. This is racing, we must now look ahead, not give in and continue to work hard.” 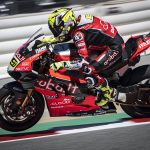 Positive start to the Laguna Seca weekend for the Aruba.it Racing – Ducati teamPress 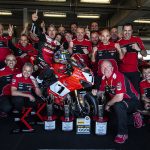