Positive start to the Laguna Seca weekend for the Aruba.it Racing – Ducati team

Both Aruba.it Racing – Ducati team riders were right up at the front end of the action on the first day of free practice for Round 9 of the Superbike World Championship at the Laguna Seca Raceway. Chaz Davies topped the timesheets on his Ducati Panigale V4 R, while Álvaro Bautista finished third, just two-tenths of a second off the pace of his team-mate.After a not particularly satisfactory FP1 session in which Chaz finished in sixth place, the 32-year-old Welshman made a major breakthrough in the afternoon thanks to some radical changes made to the set-up of his bike. As well as setting the quickest time of the day in 1’23.387, Chaz also showed excellent pace and constantly recorded fast times in the final part of the session.Bautista also made a major step forward in the afternoon, moving up from seventh in FP1 to third in FP2 behind Davies and Rea (Kawasaki). The 34-year-old Spanish rider has not raced at Laguna since 2013 and so used the first session to regain confidence with the Californian track while during the second session he was able to push harder and lap in good times.Tomorrow the third and final free practice session will be held at 09:00 local time (18:00 CET), followed two hours later at 11:00 (20:00 CET) by Superpole qualifying for the starting-grid line-up for Race 1, which gets underway at 14:00 (23:00 CET).Chaz Davies (Aruba.it Racing Ducati #7) – 1’23.387 (1st)“It’s definitely a good start to the weekend even though it’s only Friday, and it was good to see that P1 on the pit board again. It’s been since Imola and we’ve had some trying times in between but we really felt like we turned the corner in that session. We changed some quite drastic stuff from the morning and just went in the right direction. Overall the bike worked really good, so I’m very happy and hopefully we can take another step forward tomorrow. This is a track where I usually go well at so the target this weekend is to be up there and challenge for the podiums.”Álvaro Bautista (Aruba.it Racing – Ducati #19) – 1’23.653 (3rd)“Today was a positive day even though, as it’s been several years since I raced here with MotoGP, I had to modify my reference markers and revise a few lines. In the morning session we were struggling with the rear grip and had to work hard to improve this, but in any case we weren’t able to get a good feeling at the end of the session. In the afternoon run we focussed on the bike’s turning and stability, also improving the grip at the same time. I’m really happy because my sensations with the bike gradually improved during the day and I’m feeling confident for tomorrow.” 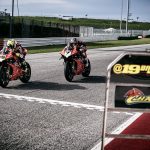 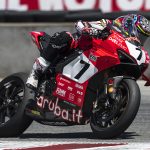 Chaz Davies back on the podium in Race 1 at Laguna Seca with a good second place, Álvaro Bautista finishes in 17th place after a crashPress