The second half of the championship gets underway for the Aruba.it Racing – Ducati

The Aruba.it Racing – Ducati team goes back to its roots this weekend at the Donington Park circuit in Britain, where the Superbike World Championship for production-based machinery first got underway 32 years ago. After the Misano weekend, the Italian team has now arrived in England for the eighth round of 13, which marks the start of the second half of the season.Even though he has an advantage that is now down to 16 points over his chief rival Rea (Kawasaki), Bautista continues to lead the table with 330 points, but the 34-year-old from Talavera de la Reina knows that he cannot afford any more setbacks in what will be his first race on a Superbike machine at Donington.For his part, his 32-year-old Welsh team-mate Chaz Davies, who in his lengthy career has not yet won an SBK race at Donington, is refusing to give up and will continue to work hard to improve and find the right feeling with his Panigale V4 R.The SBK World Championship returns to action therefore at a track where, out of the 52 races held so far, Ducati riders have won 17 times, the last of which however in 2011 with Carlos Checa: on just two occasions (1995 with Carl Fogarty and 1996 with Troy Corser) have they scored a double win.The Aruba.it Racing – Ducati team will be out on track on Friday at 10:30 local time (11:30 CET) for the first free practice session, while the weekend schedule sees Race 1 take place at 14:00 (15:00 CET) on Saturday, the Superpole Race at 11:00 (12:00 CET) on Sunday, followed by Race 2 at 14:00 (15:00 CET).Álvaro Bautista (Aruba.it Racing – Ducati #19) – 1st (330 points)“I have to learn from my mistakes of the last two rounds, because I think I was a bit over-confident; now we just have to concentrate on the next round. Donington Park is a track that I know quite well, but I’ve only raced there on smaller category bikes and never in MotoGP. The next two rounds at Donington, and immediately after at Laguna Seca, should be a bit different and interesting for us because they take place on two tracks where we don’t have any data with the Panigale V4 R. In any case our performance is quite high, so we’ll see if we can achieve the same level reached so far this season.”Chaz Davies (Aruba.it Racing – Ducati #7) – 8th (114 points)“Donington is my home race, so it’s always nice to go back there. At the Misano round, we still didn’t feel like we’ve got a base set-up at the moment so I don’t know what to expect. The priority for me and the team is just to find something from the bike to make some steps forward. I’ve had some decent results over the years with Ducati, but only podiums, so I know we can go well around there. We’ll analyse the work schedule before going out on track on Friday morning, and together with the guys in the team, try and come up with something good for the weekend.”The Donington Park circuitFor the Superbike World Championship, everything began way back in 1988 at the famous Donington Park circuit. Since that very first year – when the two winners were Davide Tardozzi (Bimota) and Marco Lucchinelli (Ducati) – the British track has been the venue for 52 World SBK races, and it always attracts an enthusiastic crowd. Set in amongst the splendid Leicestershire countryside, there are plenty of vantage points from which to view the magnificent Donington Park circuit, with corners like Craner Curves and Coppice to name but a few.Circuit Record: Sykes (Kawasaki), 1’26.641 (167.16 km/h) – 2017Fastest Lap: Rea (Kawasaki), 1’27.605 (165.32 km/h) – 2016Track Length: 4.023 kmRace Distance: 2 x 23 laps (92.529 km), 1 x 10 laps (40.230 km)Corners: 12 (5 left, 7 right)2018 ResultsRace 1: 1. Van der Mark (Yamaha); 2. Rea (Kawasaki); 3. Sykes (Kawasaki)Race 2: 1. Van der Mark (Yamaha); 2. Razgatlioglu (Kawasaki); 3. Rea (Kawasaki)Álvaro BautistaBike: Ducati Panigale V4 RRace Number: 19Age: 34 (born on 21 November 1984 in Talavera de la Reina, Spain)SBK Races: 19First SBK Race: 2019 Phillip IslandWins: 14First Win: 2019 Phillip IslandPole Positions: 3First Pole: 2019 BuriramWorld Titles: 1 (2006 125cc)Chaz DaviesBike: Ducati Panigale V4 RRace Number: 7Age: 32 (born on 10the February 1987 in Knighton, UK)SBK Races: 195 First SBK Race: 2012 ImolaWins: 29First Win: 2012 NürburgringPole Positions: 6First Pole: 2015 Laguna SecaWorld Titles: 1 (2011 Supersport) 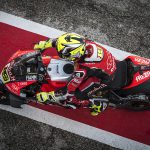 Álvaro Bautista crashes out in Race 2 in Round 7 of the Superbike World Championship at Misano Adriatico, after winning the Superpole Race, while Chaz Davies arrives twice at the flag, but in 17th and 7th placePress 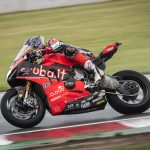