Both Aruba.it Racing – Ducati team riders were unable to obtain the results they had hoped for today in Race 1 of the UK Round of the Superbike World Championship at the Donington circuit. After Friday’s hot summer weather, today the temperature dropped considerably and the riders – in the morning’s Superpole session but above all in Race 1 in the afternoon – encountered a wet surface and at times heavy rain which made the track particularly treacherous.The man who paid the worst consequences was Álvaro Bautista who, after starting from sixth place on the grid, crashed at Schwantz Curve on lap 11 while in a solid fifth place. As he failed to score any points, the Spanish rider lost his lead in the championship to race winner Rea (Kawasaki) and he is now nine points down on his chief rival, with the Superpole Race and Race 2 still to come tomorrow.Team-mate Chaz Davies, tenth on the grid, struggled with a lack of grip for the entire duration of the race. For this reason, the Welshman was unable to go any higher than tenth place, and he also has another two chances tomorrow of scoring a positive result.Tomorrow the ten-lap Superpole Race gets underway at 12.00 CET, with Race 2 following at 15.00.Chaz Davies (Aruba.it Racing – Ducati #7) – 10th “I just had very little grip throughout the race really. It seemed like the tyre wasn’t ready for the first five laps because I didn’t have any traction at all. It got a bit better than that but it took a few laps to get my pace then it stayed consistent throughout the rest of the race, but I wasn’t able to push anymore, because it felt like the rear was wanting to get away from me in the fast parts of the track. There were definitely slippery conditions out there today, but let’s hope tomorrow will be dry and we can come away with a better result.”Álvaro Bautista (Aruba.it Racing – Ducati #19) – DNF “Today was a difficult race, and in these conditions I didn’t have much grip at the rear. This morning after FP3 we made a few changes that helped me to improve the feeling in the wet, but it wasn’t enough. At the start I didn’t have a good sensation and I struggled to make the pace. As the laps went by the situation improved, and as a result I could push harder. Unfortunately, I lost the rear at Turn 6 and couldn’t do anything to prevent the crash. Obviously we didn’t expect to finish the race in this way, but tomorrow we have another chance to try and turn the weekend around and get a good result.” 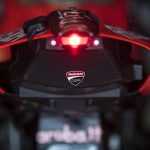 The second half of the championship gets underway for the Aruba.it Racing – DucatiPress 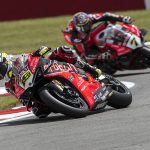 World Superbike at Donington: Álvaro Bautista salvages a tough weekend for the Aruba.it Racing – Ducati team with a fourth place and a Race 2 podium, Chaz Davies seventh and ninth in today’s two racesPress