Unfortunately, the Aruba.it Racing – Ducati team riders, Álvaro Bautista and Chaz Davies, were unable to obtain the results they had hoped for in the French Round of the Superbike World Championship at the Magny-Cours circuit, which saw Jonathan Rea crowned WSBK champion for the fifth time in a row.After the rain of the first two days, Davies took home two fourth places in both of today’s races which were held on a dry track. Following a good run in the Superpole Race, in race 2 the Welsh rider was lapping at the same pace as the leaders when he was involved in the incident between Razgatlioglu and Bautista. This unfortunate episode meant that Chaz lost precious seconds which he was never able to make up again.Álvaro Bautista instead crossed the line with a good fifth place in the Superpole Race but in race 2 was forced to retire because of the impact with the bike of Toprak who crashed at Turn 13.In the Riders’ standings Álvaro Bautista lies in second place, 129 points behind the winner of the title Rea, while Chaz Davies remains in seventh place with 223 points.Ducati still holds on to second place in the Constructors’ standings, and the Aruba.it Racing – Ducati team is classified second in the Teams’ standings.World SBK now heads off to South America for the penultimate event on the calendar, where from 11 to 13 October the Argentinean Round will be held at the El Villicum circuit near the city of San Juan.Chaz Davies (Aruba.it Racing Ducati #7) – 4th / 4th  “In both races today I finished in fourth place, which in itself is not a bad result, but I feel I could have got a lot more. In race 2 I almost got caught up in the incident between Toprak and Álvaro so took avoiding action by going off the track. Unfortunately, I came off the grass at four seconds back and finished the race with the same gap that I was unable to make up. It was so frustrating not to get the chance to fight for the win, because the pace was there.”Álvaro Bautista (Aruba.it Racing – Ducati #19) – 5th / DNF “Fortunately physically I’m OK after the crash, I’m just a bit disappointed because I think in race 2 I was able to fight for the win. For sure the weekend was tough, it was a new track that I’d never seen before and there was very little time to ride in dry conditions. Yesterday in the first race I managed to improve the feeling with the track and made up a lot of positions, while today in race 2 I made a good start and felt really good with the bike up at the front. Unfortunately, I was involved in Razgatlioglu’s crash at Turn 13 and his mistake caused my retirement. It’s a pity to finish in this way but it’s all part of racing. Congratulations to Jonathan Rea because he had a great season. During the championship Jonathan has always been able to get the best out of every situation, and for sure we didn’t lose the title because of this race.” 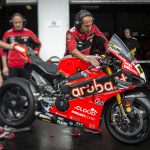 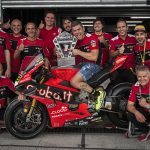