Álvaro Bautista (Aruba.it Racing – Ducati) returned to his winning ways at the San Juan Villicum circuit in Argentina today with a superb performance in truly challenging conditions. Starting from pole position after clinching his fourth Superpole trophy of the season, the 34-year-old from Talavera de la Reina (Spain) first had a terrific battle with the newly-crowned world champion Jonathan Rea (Kawasaki) in the early laps, before breaking away from the northern Irish rider, then he increased his lead and went on to score his sixteenth win of the year.The precarious conditions of the asphalt were not considered to be conducive to racing by several riders, including Chaz Davies, and as a result they decided not to take part in the race for safety reasons.Tomorrow the ten-lap Superpole race will take place at 18.00 CET, while Race 2 (21 laps) will start at 21.00 CET.Álvaro Bautista (Aruba.it Racing – Ducati #19) – 1st “Today I’m extremely happy to have won the race given the fact that I’ve never even seen this track before. We also picked up the Superpole so it’s been a perfect day. This morning luckily the track improved a lot over yesterday and the times came down by almost four seconds. The increase in temperature complicated the situation in Superpole, because the grip level dropped and it was difficult to do one fast lap. In the race the track remained insidious and I had to be much more careful than in other races. I tried only not to make mistakes and keep focussed especially in the initial scrap with Jonathan, with the intention of maintaining a constant pace. I want to thank all the team for their great work today, tomorrow we’ll try and keep this level.”Chaz Davies (Aruba.it Racing – Ducati #7) – DNS“Firstly, I’m disappointed with the way this day was managed. In my opinion it was important that all the riders were united but unfortunately this didn’t happen. Fifteen out of the 18 riders weren’t intending to take part in the race because of the difficult track conditions. Unfortunately, five minutes before the start some of them probably felt pressure to go on track, going against the decision taken before all together. We had proposed modifying the schedule and do two long races tomorrow to give the organizers the opportunity to improve the track conditions but our wishes weren’t taken into account. From my point of view safety is paramount and in certain situations they have to listen more to the views of the riders. All this should be considered in a constructive manner to improve in the future. We already discussed this issue in the various meetings of the Safety Commission. I’m sorry but it’s a shame to come and race at this fantastic circuit and find ourselves in this situation. Now let’s forget about today and focus on tomorrow’s races.” 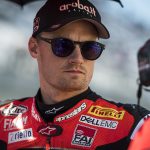