The Aruba.it Racing – Ducati team arrives at the Magny-Cours circuit in France

Following the Portuguese Round at Portimão, World SBK has now relocated almost 2,000 kilometres northwards in France for the third-to-last round of the championship. The French Round will also be the final one on European soil before the two overseas events in Argentina and Qatar in the month of October which will wrap up the season.For Álvaro Bautista (Aruba.it Racing – Ducati), the Magny-Cours circuit will be a totally new experience, unlike this year’s other new tracks like Imola and Portimão where testing had been organized before the races. Mathematically the fight for the title is still open and the French Round will give the 34-year-old Spaniard further opportunities to add more wins to his tally of 15 already this year.Team-mate Chaz Davies on the other hand gets another chance to repeat his Laguna Seca win at a circuit he knows well and where he has raced every year since 2012: the 32-year-old Welshman has in fact started 14 races at Magny-Cours, scoring three wins there in 2016 and 2017 with the twin-cylinder Panigale as well as two second places.World Superbike returns to action therefore at a circuit where, out of 34 races held so far, Ducati riders have won on sixteen occasions, the last one of which was in 2017 with Davies. On five occasions (1991 with Raymond Roche, 2003 with Neil Hodgson and Ruben Xaus, 2004 with James Toseland and Noriyuki Haga, 2011 with Carlos Checa and in 2016 with Chaz Davies) Ducati has scored a double win.The Aruba.it Racing – Ducati team will be out on track on Friday at 10.30 CET for the first free practice session, while the weekend schedule will see Race 1 at 14.00 on Saturday, the Superpole Race at 11.00 on Sunday, followed by Race 2 at 14.00 CET.Álvaro Bautista (Aruba.it Racing – Ducati #19) – 2nd (399 points)“My shoulder is much better than at Portimão, so we will immediately see what it’s like when I go on the track. I think I will have no problem to ride, but it will be very important for me to do a lot of laps on the track, learn the layout and be competitive in the race. We have to try and keep cutting the gap to Jonathan, but we are ready for the weekend and I hope to enjoy this new track.”Chaz Davies (Aruba.it Racing – Ducati #7) – 7th (204 points)“I feel good for Magny-Cours because the podium at Portimao has actually given me optimism for the rest of the season and I feel that it proves we have a pretty good package with the bike now. The French track has been quite kind to me in the past so we’ll try and get some good results there. I’m not really looking for any particular place in the championship now: of course it’s nice to be in the hunt for the top 3 but my goal is just to be competitive on the remaining circuits until the end of the year.”The Circuit de Nevers Magny-Cours The Magny-Cours circuit first appeared on the World SBK calendar for a single year in 1991 but since 2003 it has been a regular fixture, often in the final part of the season. The circuit, the former venue for the French Formula 1 Grand Prix, has a spectator capacity of 90,000 and is located near the town of Nevers, some 250km south of Paris. In the past the championship has also briefly visited both Paul Ricard and Le Mans, whilst riders of the calibre of Raymond Roche, Regis Laconi and Sylvain Guintoli have been worthy representatives of France in World SBK, with the former winning the 1990 title and the latter in 2014.Circuit Record: Sykes (Kawasaki), 1’35.696 (165.94 km/h) – 2018Fastest Lap: Rea (Kawasaki), 1’37.152 (163.45 km/h) – 2018Track Length: 4.411 kmRace Distance: 2 x 21 laps (92.631 km), 1 x 10 laps (44.110 km)Corners: 17 (8 left, 9 right)2018 ResultsRace 1: 1. Rea (Kawasaki); 2. Sykes (Kawasaki); 3. Fores (Ducati)Race 2: 1. Rea (Kawasaki); 2. Davies (Ducati); 3. Van der Mark (Yamaha);Álvaro BautistaBike: Ducati Panigale V4 RRace Number: 19Age: 34 (born on 21st November 1984 in Talavera de la Reina, Spain)SBK Races: 27First SBK Race: 2019 Phillip IslandWins: 15First Win: 2019 Phillip IslandPole Positions: 3First Pole Position: 2019 BuriramFastest Laps: 14World Titles: 1 (2006 125cc)Chaz DaviesBike: Ducati Panigale V4 RRace Number: 7Age: 32 (born on 10th February 1987 in Knighton, UK)SBK Races: 204First SBK Race: 2012 ImolaWins: 30First Win: 2012 NürburgringPole Positions: 7First Pole Position: 2015 Laguna SecaFastest Laps: 31World Titles: 1 (2011 Supersport) 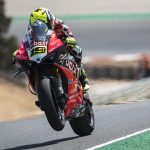 World Superbike in Portugal: win #15 of the season for Álvaro BautistaPress 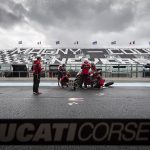 World Superbike at Magny-Cours: rain hampers the opening day of free practice at the French circuitPress