World Superbike in Portugal: win #15 of the season for Álvaro Bautista

Álvaro Bautista (Aruba.it Racing – Ducati) returned to the top of the podium today at the Autodromo do Algarve circuit in southern Portugal after taking his fifteenth win of the season and his first since the Misano round in June. After the morning’s Superpole Race, which he finished in second place after a difficult start and a great recovery, Álvaro also suffered at the start of Race 2 but, using the exceptional power and speed of his Panigale V4 R on the long straight of the Portuguese track, he took only six laps to take the lead from Rea (Kawasaki). Despite being down on energy due to a not entirely healed shoulder, the 34-year-old from Talavera de la Reina was able to hold off his northern Irish rival on the final lap to cross the line with an advantage of just 0.111s.After yesterday’s good performance, which saw Chaz Davies score an excellent second place in Race 1, today the Welshman didn’t have the same fortune. In the Superpole Race, with relatively few laps available, he was unable to move up the field and finished in tenth overall. In Race 2, he therefore started from 14th on the grid and was gaining positions when in the mid-race phase a problem with the gear-shifter forced him down into a sixteenth place finish at the flag.Today’s win and the results obtained over the weekend allow Álvaro to remain firmly in second place in the standings with 399 points, 91 behind leader Rea, while Chaz is in seventh place with 204 points. The next round of the Superbike World Championship will take place in three weeks’ time at the Magny-Cours circuit in France, from 27 to 29 September.Álvaro Bautista (Aruba.it Racing – Ducati #19) – 2nd / 1st  “It has been a very tough weekend for me, especially physically because my shoulder is still not at 100%. I felt worse this morning after yesterday’s race so I tried to start well in the Superpole Race. Unfortunately, I lost a lot of positions and used up most of my energy, but I finished second which meant that I could start from the front row in race 2. In the afternoon I again made a bad start, lifting the front of the bike up and losing some positions but I was still in the leading group so was not too worried. Mid-race I felt my pace was stronger so I decided to go for the lead and push hard until the end. I could manage the advantage but in the last two laps I felt every drop of energy leave me, luckily it was the last lap because I didn’t have anything left. It was my first time here in Portimão and I’m happy to get a win again after more than two months.”Chaz Davies (Aruba.it Racing – Ducati #7) – 10th / 16th “After yesterday’s good result, we made a set-up change to try and improve even more, but it didn’t work the way we expected. Obviously starting from P14 also means it’s pretty hard work from there and for me the race was tough. The initial pace was not so bad even though I struggled in the early laps a little bit, then just when I thought I could make an impact on the race I started encountering some problems with the gear shifter and it wouldn’t let me ride in the right way. The podium here in Portimão was good, but I’m disappointed with the way things turned out today. Overall the weekend has given me optimism going forward and it just proves we’ve got a pretty good competitive window now, even on tracks that are usually unfavourable for us.” 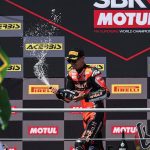 World Superbike in Portugal: Chaz Davies gets onto the podium again with a great run to second place in Race 1Press 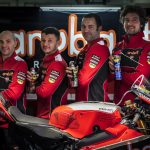 The Aruba.it Racing – Ducati team arrives at the Magny-Cours circuit in FrancePress