The second 2020 test session, held at the Autodromo Internacional Algarve in Portimao (Portugal), ended with an excellent result for Scott Redding and Chaz Davies who finished in 2nd and 5th position respectively.

It was an intense two days testing for the Aruba.it Racing – Ducati riders who continued the setup work started last week at Jerez De La Frontera.

After finishing the first session with the quickest time, Scott Redding (199 laps completed in total) repeated himself on the second day of activity, recording very interesting lap-times especially on the race pace, before finishing with the second-fastest time overall (1’40.883) just 79 thousandths of a second off Razgatlioglu (Yamaha).

It has been two profitable days for Chaz Davies also, as the welsh rider collected important data for the first round of the 2020 WorldSBK season scheduled at the end of February in Australia.

“It was a good day even though, to be honest, I couldn’t find the ideal pace. On a few occasions, I found traffic on the track and when I tried the new tyres, the four almost consecutive red flags didn’t allow me to lap consistently. The result of the test is still very positive, considering that this is a circuit where I only rode once in the past and it can’t be considered the most favourable for Ducati. All things considered, we have worked very well and I am satisfied”.

“It’s been a busy couple of days. We were lucky because the weather helped us to carry on our work. We tried new solutions: some of them gave positive results, while on other aspects we will have to work further. The lap-times? We will return to Portugal in September and the track conditions will be completely different so the crono wasn’t our first target. In view of the first Grand Prix in Australia, I feel much more ahead of what I felt last year”. 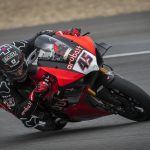 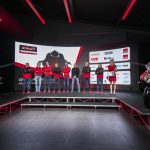