The 2020 World Superbike season began today with a spectacular race at the Phillip Island circuit (Australia) as Scott Redding took his first podium with Aruba.it Racing – Ducati while Chaz Davies made a great comeback by finishing eighth.
Starting from the front row (P2) after a convincing Superpole, Scott led the race from lap 12 to lap 16 before being involved in a gripping battle with the Razgatlioglu (Yamaha), Van Der Mark (Yamaha) and Lowes (Kawasaki).  On the final lap, the British rider tried to create the conditions to exploit the power of his Ducati on the final straight, conquering the third place just 41 thousandths of a second from Razgatlioglu and 7 thousandths of a second from Lowes.
After a difficult qualifying session that forced him to start from row six (P16), Chaz managed to recover six positions in the first lap. The Welshman then ended his race in eighth position after successfully attacking Sykes two laps from the end.

Scott Redding (Aruba.it Racing – Ducati #45)
“I am very happy with the way we started the season with both the front row this morning and the podium finish in Race 1. I said that finishing in the top three positions would be a great result and for that, I thank the team for the work done so far. I can say that it has been a phenomenal race, we fought until the end and I think that people watching from home and especially those who are on the track enjoyed a lot”.

Chaz Davies (Aruba.it Racing – Ducati #7)
“Unfortunately, the starting position compromised the race. We didn’t manage to exploit the Q tyre in qualifying and we have to figure out how to solve this problem. From the middle of the race, my pace wasn’t bad, I was lapping with times close to the front group but obviously, the gap was too big to try to catch them. In tomorrow’s Superpole Race it will be important to recover some positions in order to start in a better condition”. 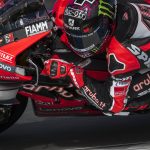 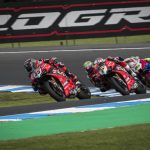