Exciting Race 2 for the Aruba.it Racing – Ducati team as Scott takes his third podium finish and Chaz recovers 10 positions for a precious Top 5.

The first round of the 2020 WorldSBK season, which took place at the Phillip Island circuit (Australia), ends with an excellent result for the Aruba.it Racing – Ducati team thanks to Scott Redding’s third consecutive podium finish and the great comeback that allows Chaz Davies to finish in fifth position.
Thanks to third place in the Superpole Race, Scott Redding secures a front row place in Race 2. The start of the English rider, however, is not the best but Scott is good to stay focused and on lap 6 he attacks Razgatlioglu (Yamaha) to regain the third position. Despite the high consumption of the front tire, Scott stays with the leading group and wins a duel with Van Der Mark (Yamaha) to take the podium that allows him to go to Qatar with the second place in the Superbike World Championship standings.
Chaz Davies doesn’t manage to be incisive in Superpole Race and is forced to start from the fifth row. From mid-race, the Welshman’s pace is extremely competitive and allows him to get very close to the front group. In the last two laps, he engages in a duel with Bautista to complete a fantastic comeback and finish in 5th position.

Scott Redding (Aruba.it Racing – Ducati #45)
“What can I say? I’ve been on the podium three times, on two occasions I finished within a tenth of a second off the winner: not bad for my first Superbike weekend. I want to thank the team for their work. It was very important to get off to a good start and I am very satisfied with that. Maybe we still lack some speed but it would be wrong to make comparisons with Alvaro who is much lighter than me”.

Chaz Davies (Aruba.it Racing – Ducati #7)
“It was a pretty tough weekend, but all in all, things didn’t go badly in Race 2. It was good to be able to get closer to the front group even though the starting position was very complicated. Of course I can’t be super happy about this weekend but it was very important to finish in a positive way. We still have a lot of work to do and I can’t wait to be in Qatar, a track that I really like”. 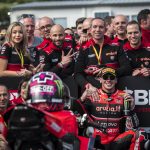