Scott Redding and Chaz Davies overcome the difficulties of the Portimao weekend thanks to an exciting Race-2 that allows the Aruba.it Racing – Ducati team riders to finish second and fourth respectively.

Starting from the second row after the fifth place in SuperPole Race, Scott Redding was the great protagonist of the first lap that managed to close in second position. In the first half of the race, he tried to stay close to Rea (Kawasaki) then had to defend himself from the return of Van Der Mark (Yamaha) whose race pace seemed to be more incisive. Between lap 13 and lap 14 the battle was intense but Scott fought with great stubbornness and managed to get a valuable second place under the chequered flag.

A crash in SuperPole Race forced Chaz Davies to start from P13. The Welsh rider also started great and after 5 laps overtook Haslam (Honda) to move into sixth position, putting pressure on Razgatlioglu (Yamaha) and Lowes (Kawasaki) who made two mistakes. For Chaz Davies a positive fourth place after a great comeback.

P2 – Scott Redding (Aruba.it Racing – Ducati #45)
“It has been a difficult weekend and for this reason ending with a podium is a precious result for me and for the whole team. In SuperPole Race we were able to improve things compared to Saturday but it is clear that the feeling with the bike was not ideal. I tried to stay close to Rea to create a gap with the group behind but in the second part of the race, I struggled a lot especially with the front. When Van Der Mark got me I only thought about defending myself to conquer this result. I am happy for me and for the team. We go to Aragon with great conviction”.

P4 – Chaz Davies (Aruba.it Racing – Ducati #7)
“The goal is always to bring home a trophy but I have to admit it was still a good race. I take this fourth place with satisfaction, especially after all the problems we had this weekend. Unfortunately, the contact with Laverty in SuperPole Race forced me to start from the fifth row and this didn’t allow me to stay with the front group. The race pace, however, was very good and for this reason, I am satisfied. Now we move to Aragon for two-days testing. It will be an important opportunity to prepare for the next six races”.

Serafino Foti (Team Manager Aruba.it Racing – Ducati)
“It is clear that after the strong weekend in Jerez we expected to get better results in Portimao. We experienced a lot of difficulties both Friday and Saturday and we were not able to put our riders in the best conditions to be competitive. I would like to thank our guys who, after analyzing Saturday’s race data, did a great job allowing us to improve our performance in Race 2. Our task is to continue to work with great concentration and never give up. In three days we will be at Aragon to prepare in the best possible way for the next double round at Motorland”. 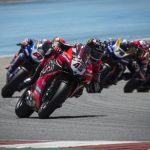 #PRTWorldSBK Race-1. Difficult race for Redding and Davies, seventh and eleventh respectively under the chequered flag.Press 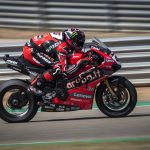