#PRTWorldSBK Race-1. Difficult race for Redding and Davies, seventh and eleventh respectively under the chequered flag.

It was a tough Saturday for the Aruba.it Racing – Ducati team at the Algarve International Circuit in Portimao.
Scott Redding and Chaz Davies were not able to be incisive in the morning qualifying and were forced to start from eighth and thirteenth position respectively.
In the first half of the race, Redding was convincing. The British rider immediately recovered two positions and between the fifth and the eighth lap attacked Lowes (Kawasaki), Van Der Mark (Yamaha) and Baz (Yamaha) to move into third position. From lap 10, however, his race pace dropped drastically and did not allow him to defend the podium forcing him to pass under the checkered flag in seventh position.
Despite a good start, Chaz Davies also could not find the best feeling during the race. The Welsh rider, however, had the merit of not giving up and in the last 2 laps, he managed to recover three positions finishing in P11.Scott Redding is still leading the Superbike World Championship standings with 107 points, 8 points ahead of Rea (Kawasaki).
Chaz Davies (62 points) is in sixth position, 1 point behind Van Der Mark (Yamaha).

P7 – Scott Redding (Aruba.it Racing – Ducati #45)
“Despite the problems in qualifying I got off to a good start and managed to get my way through the field to reach the podium positions. The feeling, though, wasn’t the best. I struggled to get the bike working in the right way throughout the race and in the last 6/7 laps things got worse. I gave my best to defend the position as long as I could. We have to work tonight to solve the problems and get in the right conditions to fight for the podium tomorrow”.

P11 – Chaz Davies (Aruba.it Racing – Ducati #7)
“It’s been a very difficult day and I must admit I’m disappointed, especially after the weekend in Jerez when feelings and results were very positive. I have had problems with the bike since the early laps and we will try to understand what happened to find a solution for tomorrow’s two races”. 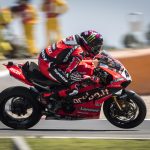 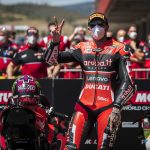