Thanks to an exciting comeback, Chaz Davies conquers the second step of the podium in Race-1 of the Pirelli Estoril Round thus obtaining the third place in the final classification of the 2020 Superbike World Championship. Scott Redding, who started from the last position, is forced to retire after 6 laps, ending the season in second place behind Jonathan Rea (Kawasaki).

The Saturday of Estoril started with a dramatic Superpole that saw first Redding and then Rea crash in the very first laps. After dominating all the free practice sessions, Scott crashed in the first lap of the Superpole due to a frightening high side. Despite the serious delay in transporting the bike back to the garage, his mechanics performed a real miracle by putting him in a position to get back on track again. Unfortunately, only for a handful of seconds the British rider was unable to cross the finish line before the checkered flag and was forced to start from the last position on the grid.

After a difficult start from fourth position, Chaz Davies made a great comeback. His progression was constant and on lap four he overtook Rinaldi (Ducati) to move into fifth position. The Welsh rider’s race pace was extremely incisive and allowed him to close the gap with Gerloff (Yamaha) and Rea who he overtook on lap 12, finishing in second place under the chequered flag.

Scott Redding tried to push hard, recovering 8 positions in the first two laps. On lap six, when he was in eleventh position, he, unfortunately, had to abandon the race due to a technical problem.

The Aruba.it Racing – Ducati team will return to race tomorrow at 12 noon (CET) in the Superpole Race with the aim of further reducing the disadvantage against Kawasaki (19 points) to assault the constructors’ title in Race-2, the last event of the 2020 WorldSBK season.

P2 – Chaz Davies (Aruba.it Racing – Ducati)
“Unfortunately I was not able to convert the best qualifying of the season with a good start. I immediately found myself in a rather difficult position but from the start, the feeling was excellent. I started to recover positions, chasing Van Der Mark (Yamaha) for the third place in the final standings. After his crash, I pushed even harder to get another podium. It’s a great result and I would like to thank the team for the work we have done in the last two months where we have made great progress. I will be back on track tomorrow with a little less pressure and this could help me to get other important results”.

DNF – Scott Redding (Aruba.it Racing – Ducati)
“As I said at the beginning of this weekend, I came to Portugal to give everything. I was the fastest in all the sessions and the feeling with the bike was excellent. Unfortunately, I crashed in Superpole: it was a very strange crash and we will have to understand why. It was a shame that the bike came back to the garage so late. My team did an incredible job but I missed a few more seconds to try at least one time attack. In the race, there was a technical problem but starting from the last position it was really difficult to do something important. I want to congratulate Jonathan. It was a great battle, with a lot of respect. I will try again next season. I know I can do it. I never give up”. 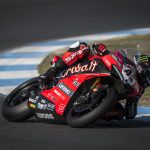 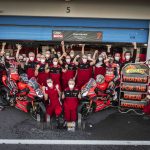 #EstorilWorldSBK Race-2. The WorldSBK 2020 season ends with another spectacular one-two: triumph for Chaz Davies, P2 for Scott Redding. The Aruba.it Racing – Ducati team wins the team classification for the first time in historyPress