#EstorilWorldSBK Race-2. The WorldSBK 2020 season ends with another spectacular one-two: triumph for Chaz Davies, P2 for Scott Redding. The Aruba.it Racing – Ducati team wins the team classification for the first time in history

The last race of the 2020 WorldSBK season gave a great emotion to the Aruba.it – Racing Ducati team that won for the first time the title in the team classification (introduced in 2011) thanks to the third extraordinary one-two of the season for Chaz Davies (P1) and Scott Redding (P2).

Starting from fourth position, Chaz Davies took the lead after the first two corners. His race pace was incisive and allowed him to secure first position until the chequered flag.

After a stunning comeback in the Superpole Race (from P22 to P6), Scott Redding pushed hard in the early laps and immediately chased the podium group, putting pressure on Rea (Kawasaki) who crashed on lap nine. Halfway through the race the gap with Razgatlioglu was 2 and a half seconds but Scott kept pushing and with five laps to go he attacked the Turkish rider to take second place.

P1 – Chaz Davies (aruba.it Racing – Ducati #7)
“It was a day full of emotions, first on the grid then at the Parc Ferme. My boys made me excited and I thank them for all the passion and commitment with which they have worked over the years. A big thank you to the whole Aruba.it Racing – Ducati team for what they have done for me and for what we have spent together. I think this is the best way to say goodbye to the team, a result that the whole team deserves and I am happy to have given them this satisfaction. It was a very nice race, I went on track with great determination and the feeling with the bike was absolutely extraordinary. And I’m happy to have celebrated with the whole team. Emotions that I will never forget”.

P2 – Scott Redding (aruba.it Racing – Ducati)
“I am extremely happy with this result. It was not an easy race for me. In the first laps, I had some problems and I couldn’t be fast. However, I remained concentrated and from the middle of the race, the feeling grew and allowed me to push hard to get Toprak. I think it’s a great season finale for us and I’m happy to have shared the podium with Chaz. We did a great job this season and I want to thank Ducati for putting me in a position to fight for the title. I can say that the second place in the first year in Superbike is an acceptable result but we will have to do better next season. Thanks to the whole Aruba.it Racing – Ducati team for the great support and the extraordinary work of these months. Grazie Ragazzi!”

Stefano Cecconi (Team Principal Aruba.it Racing – Ducati)
“There could be no better way to close the season. We greet Chaz and thank him for the results, professionalism and commitment he has put in over the years. Today he made us excited once again, first on track and then at the Parc Fermé with his team. Thanks to the whole team, to the guys who gave their best in a very complicated season, making sacrifices and always working commendably. We didn’t manage to win the riders’ title, we missed the Manufacturer’s World Championship for one point and won the team classification. We should be proud of what we have managed to do this season. The 2021 season, however, begins tomorrow. We will only have one objective, that of improving ourselves further to achieve the results that we work so hard for every day”. 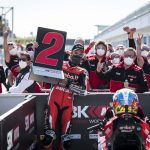 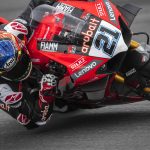