Scott Redding and Chaz Davies were the protagonists of a fantastic race held in very tricky conditions after the rain had given a respite, letting the Magny-Cours circuit dry out, before falling again a few minutes before the start.

Starting from P4 after a stubborn comeback in the SuperPole Race, Scott got off a strong start, and on lap four he successfully attacked Rea (Kawasaki) to take the lead. His race pace was dominant and allowed him to pass under the checkered flag in first position comfortably.

The progression of Chaz Davies – who started from fifth position – was constant. After overtaking Rinaldi (Ducati) on lap 9, the Welshman started to chase the leading group. Between lap 11 and lap 14, Chaz managed to recover two seconds from Rea, overtaking him with seven laps to go and then defended himself to finish third.

P1 – Scott Redding (Aruba.it Racing – Ducati)
“It was a good race. I pushed to the maximum since the first lap trying to find the feeling with the bike immediately. It has been a difficult weekend, and for this reason, I am extremely happy with this result. During the SuperPole Race, I realized that I was losing precious hundredths in two corners of the circuit. I told my team: ‘If you can solve these two details, I am sure I can win’. They did it, and I thank them”.

P3 – Chaz Davies (Aruba.it Racing – Ducati)
“I am very satisfied with this result. The feeling with the bike has been really positive all weekend, and for this, I want to thank my team for the work done in these days. The start was good, and I pushed hard to get Van Der Mark. Then I had a good duel with Jonny, and I’m happy to have finished with this good result”.

Stefano Cecconi (Team Principal Aruba.it Racing – Ducati)
“After the difficulties encountered in the first two days of this weekend, having obtained this result is for us a reason of great satisfaction and confirms the quality of our team. We have managed to keep the Superbike World Championship open, and even if the task is obviously difficult, we will go to Portugal to try. This is our DNA”. 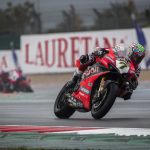 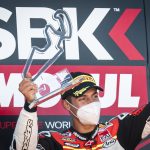