Race-1 of the Pirelli French Round was characterized by the comeback of Chaz Davies and Scott Redding who, after a difficult qualifying session, managed to finish in fourth and fifth place respectively.

The two Aruba.it Racing – Ducati riders were not incisive in the morning qualifying – held in wet conditions – and had to settle for ninth and tenth position on the starting grid.

Chaz Davies got off a good start that allowed him to immediately recover three positions. After the crash of Gerloff (Yamaha) on lap 9, Chaz went after Van Der Mark (Yamaha) who made a mistake allowing him to gain the fourth position.

In the first half of the race – characterized by heavy rain – Scott Redding could not find enough grip to push to the maximum. From lap 9 on, as the circuit started to dry, his race pace improved vertically allowing him first to overtake Rinaldi (Ducati) then to recover almost three seconds and to close the gap with Razgatlioglu (Yamaha) and Haslam (Honda). In the last lap, Scott took advantage of an error of Haslam to close in fifth position.

P4 – Chaz Davies (Aruba.it Racing – Ducati)
“I am happy for this result. The feeling with the bike was very good and for this, I am particularly satisfied. Maybe I could have pushed harder but for me, it was fundamental not to make mistakes and to take important points to increase the advantage over Van Der Mark and consolidate the third position in the standings”.

P5 – Scott Redding (Aruba.it Racing – Ducati)
“In the first laps of the race, I could not find the feeling. Things improved when the track started to dry and I was able to reduce the gap with the front group. When it started raining again I tried to stay in contact, working well especially in braking areas. I think we can do well tomorrow, especially if we can find something in acceleration”. 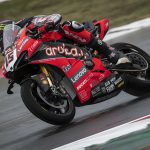 #FraWorldSBK FP. Under the heavy rain of Magny-Cours, Scott Redding and Chaz Davies conclude the free practices for the Pirelli French Round in P7 and P11 respectivelyPress 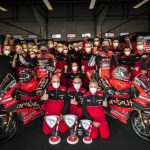