#AragonWorldSBK Race-1. Not an easy Saturday for the Aruba.it Racing – Ducati Team as Scott Redding and Michael Rinaldi ended the season opener in 4th and 7th position respectively.

The 2021 WorldSBK season officially kicked off with the first two free practice sessions at the Motorland circuit in Aragon (Spain).

Michael Rinaldi and Scott Redding closed respectively in 6th and 7th position at the end of a day in which the very high temperature did not make the Spanish circuit particularly performing.

Both Rinaldi and Redding worked on the set up of their Ducati Panigale V4 R. The Italian rider completed 15 laps finishing in 5th position with a time of 1’50.741, recorded in the last run with the new tire. Scott Redding worked throughout the session with the same rear tire completing 17 laps (11th position – 1’51.203).

Despite the higher temperature of the asphalt in the afternoon (48°, 17° more than in the morning session), Scott Redding was able to improve his best lap time by almost half a second, finishing in third place with a chrono of 1’50.780, 90 thousandths of a second behind Rea (Kawasaki).
Michael Rinaldi has worked throughout the session on the race pace completing a convincing race simulation of 19 laps and closing the session with a best time of 1’51.179.

Michael Rinaldi (Aruba.it Racing – Ducati #21)
“Today was a very special day. It was my debut with the Aruba.it Racing – Ducati team for an official session, that’s why I am very happy and full of pride. I have to admit that both FP1 and FP2 were a bit special. We had to face some inconveniences that we did not expect but despite everything, my race pace is not bad and this gives me great confidence ahead of tomorrow. I’m sure the team will work hard to put me in a position to be competitive”.

Scott Redding (Aruba.it Racing – Ducati #45)
“I think it was a difficult Friday for all the riders. With my team, we have worked a lot on the choice of tires without focusing on the fast lap time but trying to find a good pace with both solutions. The red flag has interrupted our work but I think we have found positive indications. It’s difficult to compare the feeling I had today with last year’s race, especially because the grip was really lower”. 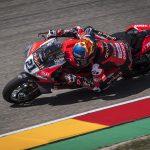 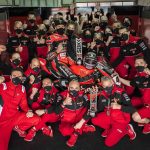 #AragonWorldSBK Race-2. Only the brave! Scott Redding bets on slick tires – on the wet track – and conquers a stunning victory at MotorlandPress