#AragonWorldSBK Race-2. Only the brave! Scott Redding bets on slick tires – on the wet track – and conquers a stunning victory at Motorland

This Sunday at the Motorland circuit of Aragon (Spain) will not be easily forgotten, also due to the unpredictable weather conditions.

A day full of emotions for the Aruba.it Ducati – Racing team, started with the disappointment for the Superpole Race and finished with the heroic victory of Scott Redding.

Michael Rinaldi plays all for all but his extreme choice does not bring the desired results.

Both Redding and Rinaldi start the race with rain tires, but they have to face some difficulties from the first lap:  the rain is not as heavy as in the morning, and the race gets complicated for both the riders.

Scott tries to push in the first 2 laps taking the lead, but soon he is no longer able to secure his position against his opponents, who chose the intermediate tires.
The Englishman fights until the end to finish in P8 and gaining, at any rate, 2 points.

Starting from the ninth position, Michael finds himself in the same situation and finishes in P12.

It is tricky to guess the track condition. The rain has stopped falling but the tarmac is still wet and chances of a new storm are high.

Scott Redding gets on the grid with the intermediate tires, but at the very last moment right before the start, he decides – the only one to make this choice – to opt for the slicks tires, both on the front and on the rear. The English rider wins his bet: he regains seven positions in the first six laps, and then he takes the lead on lap 7, winning the race almost 10 seconds ahead of Rea (Kawasaki).

Michael Rinaldi tries to play the same card coming back to the pits at the end of the sighting lap to put on slick tires. The gap with the group – on intermediate tires – is however too wide to be bridged. The Italian rider finishes in 16th place.

Scott Redding, Michael Rinaldi, and the Aruba.it Racing – Ducati team now move to Portugal for the second round of the 2021 season, which is taking place next weekend at the Estoril circuit.

Scott Redding (Aruba.it Racing – Ducati #45)
“Yes, it’s true, I took a big risk. In my career, however, the intermediate tires have betrayed me twice, both times when I was close to achieving a great result. For this reason, without hesitation, I asked my team to put on slicks tires. In the first few laps I tried not to make any mistake and then, obviously, it was not difficult to take the lead. For sure I would have preferred winning after having fought with the other guys, but it is still an important success, especially in light of what happened this weekend”.

Michael Rinaldi (Aruba.it Racing – Ducati #21)
“In these circumstances, you have to know how to evaluate the situation and make the right choice. Today I made the wrong choice and, as a result, I had one of the worst races of my career.  Last year I came away from Aragon with 3 podiums; this year with only 9 points. This means that we have to find the feeling that we have been missing. The motivation is not lacking and I will try, together with the team, to turn the page from the next race”. 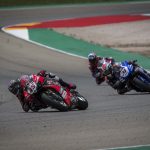 #AragonWorldSBK Race-1. Not an easy Saturday for the Aruba.it Racing – Ducati Team as Scott Redding and Michael Rinaldi ended the season opener in 4th and 7th position respectively.Press 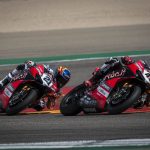 #EstorilWorldSBK. The second round of the 2021 WorldSBK season to get underway at Circuit Estoril (Portugal) on FridayPress