#EstorilWorldSBK. The second round of the 2021 WorldSBK season to get underway at Circuit Estoril (Portugal) on Friday

Just a few days after the season opener at the Motorland circuit in Aragon (Spain), the WorldSBK paddock is ready to welcome teams and riders ahead of the second round of the World Superbike Championship. After 28 years of absence, the Estoril Circuit (Portugal) made an exciting comeback to WSBK last year, with a fantastic double-Ducati signed by Chaz Davies and Scott Redding in Race-2: 2021 round promises to provide high entertainment as well.

The Aruba.it Racing – Ducati Team is back from a very special weekend in Aragon:  despite some difficulties at the beginning, Scott Redding, who started Race 2 with slick tires on the wet track, conquered a stunning win after an impressive race.

For Michael Ruben Rinaldi, on the other hand, it was an uphill debut; the Italian rider is strongly willing to move forward with a weekend as a protagonist in Portugal.

Scott Redding (Aruba.it Racing – Ducati #45)
“I liked the Estoril Circuit a lot last season even though the results don’t seem to confirm this feeling. The crash in Superpole and a technical issue in Race-1, however, were two determining factors;  during  Superpole Race and Race-2 the feeling was really positive indeed. The race pace has always been very good and I hope that already from Friday we can accomplish our progress”.

Michael Rinaldi (Aruba.it Racing – Ducati #21)
“We started the championship uphill.  We can use this very close round to turn the page immediately, and we will work hard with my team to make it happen. I am very motivated and I want to redeem the negative results obtained in Aragon. We will start from scratch, giving our best starting from  Friday’s free practice”.

#AragonWorldSBK Race-2. Only the brave! Scott Redding bets on slick tires – on the wet track – and conquers a stunning victory at MotorlandPress 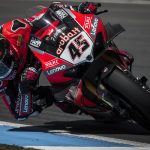