#ITAWorldSBK An extraordinary Rinaldi wins the Superpole Race and finishes second in a spectacular Race-2. Redding has to settle for fourth place.

After having dominated Race-1, Michael Rinaldi tries to complete the perfect weekend conquering the Superpole Race and then fighting for the hat-trick until the last lap in Race-2.

Scott Redding is not at his ease at the World Misano Circuit Marco Simoncelli but he is still good at limiting damages, finishing twice close to the podium.

Rinaldi’s move to overtake Razgatlioglu (Yamaha) on the fifth lap of the Superpole Race will be remembered for long time. After a superb start and a remarkable  first lap, the Italian rider starts to push hard claiming the victory in the Superpole Race.

Redding tries to fight for the podium and in the last laps he seems to be able to catch Rea (Kawasaki), but he finishes fourth.

Starting from the pole position, in the first two laps Michael Rinaldi engages in a spectacular duel with Rea and Razgatlioglu. The Italian rider remains in the lead until mid-race before Toprak’s attack. In the last 3 laps, Rinaldi tries to push for the win but he doesn’t find the ideal conditions; he ends the race with a precious second place.

Redding remains glued to the podium group until the middle of the race, giving the sensation to be able to attack Rea for the third place. The feeling with the front-end, however, is not the best and the British rider finishes fourth.

Michael Rinaldi (Aruba.it Racing – Ducati #21)
“I’m very happy with this weekend: we just missed the icing on the cake. But I must admit that in Race 2 Toprak and the Yamaha were better than us and that’s why I want to congratulate them. I gave my best trying to chase the victory but in the last laps, I took a high risk and then  I decided to bring home this very important second place. It’s a very important step forward”.

Scott Redding (Aruba.it Racing – Ducati #45)
“It was a very difficult weekend for me. Today we were able to improve a little bit the feeling with the bike compared to yesterday but it was not enough to be able to reach the podium. Honestly, in the first laps of the Superpole Race, I thought I could fight with Jonny (Rea) in an incisive way, while in Race-2 I felt I had no grip with the front tire. The season, however, is still long and I hope to be much more competitive in Donington”. 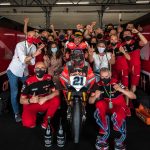 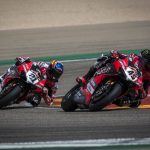