#GBRWorldSBK Race-2. Steady comeback for Scott Redding who fights for the podium until the last corner. Michael Rinaldi closes in P8.

Scott Redding bounces back from the disappointment of the Superpole Race: he gets close to the podium in Race-2, at the end of a stubborn comeback that sees him recover 7 positions.

Michael Rinaldi is able to find feeling only in the second half of the race and crosses the finish line in eighth position.

So it ends,  a very difficult weekend for the team Aruba.it Racing – Ducati on the Donington Park circuit in Great Britain. The next appointment with the 2021 WorldSBK season is set for the third weekend of July at the iconic TT Circuit in Assen, Holland.

Rain falls on the circuit, although not intensely, shortly before the start of the race.  All the riders choose the intermediate tires while Scott Redding takes the risk of racing with the rain tires. The English rider’s choice turns out to be wrong: since the first laps his gap with the leading group increases heavily, forcing him to close in 18th position.
After a slow start, Michael Rinaldi is able to improve his pace only from the middle of the race, but it’s not enough to gain points (P10).

Forced to start from the 11th position, from the third lap Scott Redding begins to push with determination. Between the 5th and 7th lap, the English rider overtakes Lowes (Kawasaki), Van Der Mark (Yamaha), and Haslam (Honda) to chase for the podium.
After Rea’s (Kawasaki) crash Redding is able, lap after lap, to close the gap with Sykes; he starts the last lap with only 4 tenths of a second less.  Scott tries to attack his compatriot but he eventually settles for fourth place.

Michael Rinaldi (started from the P12) is not able to be incisive in the first part of the race.
The Italian rider’s pace gets better from lap 10, where he gets able to first pass Haslam then Mahias (Kawasaki). The gap on Davies (Ducati) is too wide to be bridged and Rinaldi finishes 8th.

Scott Redding (Aruba.it Racing – Ducati #45)
“Needless to say, I expected a lot more from this weekend. We encountered so many difficulties from the beginning and, as if that wasn’t enough, the Superpole Race was a real disaster. I take responsibility for having raced with rain tires, already in the warm-up lap I realized I had made the wrong choice but there was no time to fix it. In Race 2, however, for the first time this weekend, I felt a positive feeling with my Ducati. The world title? Yes, the gap is wide but in Superbike there are many points available and certainly, I will not give up after 4 rounds!”

Michael Rinaldi (Aruba.it Racing – Ducati #21)
“It’s been a very strange weekend with unpredictable weather conditions that didn’t allow us to work properly. In Race-1 and in the Superpole Race the tarmac was humid and I have been maybe too “careful” losing, as a  consequence, many positions.
Race-2 was the most normal race of the weekend in dry conditions. I cannot be happy with the final position but we have understood many things that I’m sure will help us in the future. I’m a little bit disappointed with the results of this weekend but I’m sure that in Assen we can be very competitive again”. 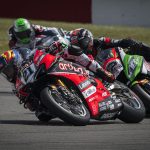 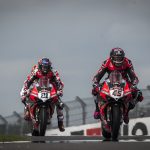 WorldSBK is back in action: Scott Redding, Michael Rinaldi and the Aruba.it Racing – Ducati Team ready for Round 5 at the TT Assen Circuit (Netherlands)Press