WorldSBK is back in action: Scott Redding, Michael Rinaldi and the Aruba.it Racing – Ducati Team ready for Round 5 at the TT Assen Circuit (Netherlands)

The iconic TT Assen Circuit (Netherlands) will be the stage for the fifth round of the 2021 WorldSBK season, which for the first time in two years will be attended by a large crowd: in fact, the “Cathedral of Speed” will populate the grandstands up to two-thirds of its capacity to offer an extraordinary show to many fans.

Scott Redding, Michael Rinaldi and the Aruba.it Racing – Ducati Team will take to the track on Friday at 10.30 am for the first free practice of the #NLDWorldSBK. Race-1 and Race-2 will be held respectively on Saturday and Sunday at 14.00 (CEST).

The TT Circuit in Assen has been the stage for several achievements for Scott Redding, who conquered 2 consecutive podiums in 2012 and 2013 while in Moto2 class, and then he also celebrated for the first time in MotoGP with the Ducati Desmosedici GP by taking third place in 2016

Michael Rinaldi’s goal is to return to fight for the podium after the extraordinary weekend in Misano which was followed by the difficulties encountered in England at Donington.

Scott Redding (Aruba.it Racing – Ducati #45)
“I’m ready to race on a circuit that has given me great emotions in the past. The TT is a circuit with a great history where I have always enjoyed racing. For the first time in almost two years, we’ll have the chance to race in front of a large crowd and this will be a great boost for me. I have many friends here and I consider this round a sort of “Home-GP”. I can’t wait to get on track on Friday”.

Michael Rinaldi (Aruba.it Racing – Ducati #21)
“I’m happy to arrive in Assen, it is a circuit I really like. I have a great desire to redeem the weekend at Donington, which was not a positive one. We’ve made progress in the last few months, we’ve found our speed but the English circuit has highlighted our weaknesses. In Holland we must find the confidence we had in Misano. I am sure that this is a favorable track both for me and for the characteristics of the bike”. 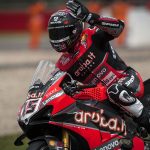 #GBRWorldSBK Race-2. Steady comeback for Scott Redding who fights for the podium until the last corner. Michael Rinaldi closes in P8.Press 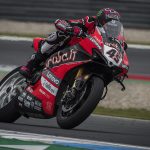 #NDLWorldSBK FP. Solid Friday for Redding and Rinaldi who close respectively in third and eighth position the free practice for the Dutch round.Press