#NDLWorldSBK FP. Solid Friday for Redding and Rinaldi who close respectively in third and eighth position the free practice for the Dutch round.

The first day of free practice of the Prosecco DOC Dutch Round offers positive indications to Scott Redding and Michael Ruben Rinaldi who both focus mainly on the race pace through the two sessions.

Scott Redding starts the Assen weekend in the best way. The British rider is the fastest for most of the session: he closes in first position, setting the best time in the second, third and fourth sectors.
Despite a difficult start, Michael Rinaldi works well with his team and in the last run he finds the right feeling to push his Ducati Panigale V4R in an incisive way.

The positive feelings of the morning are confirmed in the afternoon even if the final chrono cannot be considered as indicative. Scott Redding, in fact, works mainly on race pace trying several tire solutions without focusing on the time attack.
Same strategy for Michael Rinaldi: he took advantage of FP2 to adjust the setup of his bike, practicing on used tires for almost all the sessions.

P3 – Scott Redding (Aruba.it Racing – Ducati #45)
“I’m satisfied with how things went today. Since the morning, the feeling with the bike has been much better than the weekend in Donington. We worked a lot with the used tires to gather information ahead of the race. There are undoubtedly the conditions to get some good results. The important thing will be to stay with the leading group from the first lap, also because my race pace seems to be incisive”.

P8 – Michael Rinaldi (Aruba.it Racing – Ducati #21)
“This morning’s session was quite difficult while in the afternoon we were much more consistent. We worked exclusively on the race pace and I’m sure that if we had tried to do a lap time we would have been with the leading group. We are all very close to each other so the important thing will be to work well to understand how to make the most out of used tire, especially in the final part of the race”.

WorldSBK is back in action: Scott Redding, Michael Rinaldi and the Aruba.it Racing – Ducati Team ready for Round 5 at the TT Assen Circuit (Netherlands)Press 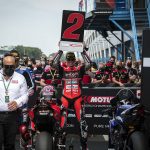 #NLDWorldSBK RACE-1. Redding back on the podium (P2) at the end of a spectacular race. After a superb start, Rinaldi crashes while in third position.Press