#NavarraWorldSBK. Redding is unstoppable: P1 in SPR and P2 in a Race-2 also marked by Rinaldi’s comeback from P13 to P7

Scott Redding was one step away from a perfect weekend: after the Race-1 win, he managed to top the Superpole Race and claim the second place in Race-2.
Despite a difficult round in Navarra, Michael Rinaldi had the merit to remain focused and finish with a positive Race-2, where he was able to recover 6 positions.
Here are the highlights of the Aruba.it Racing – Ducati team in the Pirelli Navarra Round, seventh round of the 2021 WorldSBK season.

P1 – As in Race 1, Scott Redding‘s start is perfect and allows him to take the lead. On Lap 3 Redding is involved in a stunning fight with Rea (Kawasaki) and Razgatlioglu (Yamaha) but he reacts immediately: he takes the first position on the next lap, and he scores his second consecutive win of the weekend.
P13 – Starting from the thirteenth position, from mid-race Michael Rinaldi seems to be able to push in a more incisive way, sticking to the group fighting for the tenth place but without being able, under the checkered flag, to gain positions.

P2 – Once again Scott Redding’s start is perfect such as the battle with Rea (Kawasaki) and Razgatlioglu (Yamaha) who takes the lead. The podium group has the same race pace until 3 laps to the end, when Redding attacks Rea to take the second final position.
P7 – Michael Rinaldi starts well and immediately recovers 3 positions. Between the fifth and sixth lap he overtakes first Bautista (Honda) and then Bassani (Ducati) moving up to eighth place. The race pace is good and the distance from Van Der Mark (BMW) decreases until the overtaking at 3 laps to the end; Rinaldi closes seventh under the checkered flag.

At the end of the Pirelli Navarra Round, Scott Redding reduces to 38 points the gap from the leader of the Superbike World Championship standings and Ducati leads the manufacturers’ standings with 334 points, 3 more than Yamaha and 9 more than Kawasaki.

Scott Redding (Aruba.it Racing – Ducati #45)
“It was a really positive weekend. Two wins and a second place: to be honest, is an exciting result. During Race 2 I thought a lot about the strategy, I could have pushed but at the same time, I didn’t want to take unnecessary risks. The fight for the World Championship is open and it is necessary to think in these terms. I thank the team for the work they have done. We have great confidence”.

Michael Rinaldi (Aruba.it Racing – Ducati #21)
“It was a very difficult round in which we struggled to find the feeling. We worked a lot on the bike and we found a good set up at the end in Race-2. It’s clear that the start from thirteenth position made it difficult to get a good result; but the pace proves us that in another condition we could have been with the group in front. We must remain positive and work hard in view of the next races”. 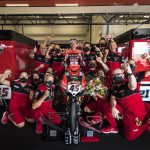 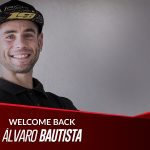 Welcome back Alvaro! Bautista to rejoin the Aruba.it Racing – Ducati Team in the 2022 WorldSBK seasonPress