Race-1 of the Pirelli Navarra Round, seventh event of the 2021 WorldSBK season, ends with the extraordinary victory of Scott Redding and the tenth place of Michael Rinaldi.
Here are the highlights of Saturday in Navarra (Spain).

P2 – Scott Redding confirms in FP3 the good feeling he had on Friday and in the Superpole, he easily finishes second behind Rea (Kawasaki).
P13 – For Michael Rinaldi, it’s a very difficult qualifying session. The Italian rider tries to gain confidence in the first run with the X tire, but in the two time attacks with the “Q” tire, he doens’t manage to be incisive.

P1 – Scott Redding’s race is flawless. A superb start, maybe the best of this year so far, allows him to take the lead already at the first corner. Rea’s reaction comes a little later but Redding gives the feeling to have a much better pace. On lap 6 the English rider is back in the lead of the race, which he dominates until the checkered flag.
P10 – Forced to start from the thirteenth position, Michael Rinaldi pushes hard, and despite a not incisive pace, he gets the ninth position on Lap 10. After a battle with Gerloff (Yamaha) and Nozane (Yamaha), the Aruba.it Racing – Ducati team rider ends his race in tenth place.

Scott Redding (Aruba.it Racing – Ducati #45)
“I’m really happy because it was not an easy race with such a high temperature. But we managed to find the ideal conditions to race at our best. Since the first laps, I had confidence, the feeling was excellent, I felt comfortable. The World Championship? I just want to keep thinking race after race. I’m doing my best, the Aruba.it Racing – Ducati team and Ducati are doing their best. Let’s continue like this.”

Michael Rinaldi (Aruba.it Racing – Ducati #21)
“It was a very tough race in which I didn’t have the right feeling to be able to push. Unfortunately, since this morning we have encountered some difficulties that we have not been able to solve. The only thing we can do is continue to keep working being confident that we’ll find the right way to be competitive again”. 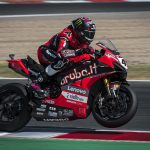 #NavarraWorldSBK FP. Good start for Scott Redding and Michael Rinaldi in the free practices for the Pirelli Navarra RoundPress

#NavarraWorldSBK. Redding is unstoppable: P1 in SPR and P2 in a Race-2 also marked by Rinaldi’s comeback from P13 to P7Press