Intense sunshine combined with a summery temperature (almost 30°) characterized Friday’s free practice for the Catalan Round, the ninth race weekend of the 2021 WorldSBK season.

At the Montmelò circuit in Barcelona (Spain), Michael Rinaldi and Scott Redding worked intensively with their respective Ducati Panigale V4R bikes, gathering positive indications ahead of the first race scheduled for tomorrow at 3.15 PM (CEST).

P7 – Michael Ruben Rinaldi starts the weekend in the right way, closing the FP1 3 tenths from the morning’s best time and being particularly fast in the T1.
P13 – Scott Redding is unable to find the best feeling with his Ducati Panigale V4R and dedicates the session to trying different set-up solutions.

P2 – Michael Rinaldi confirms the good feeling he had during FP1 and in the afternoon session he improves his lap time, finishing in second position.
P6 – Despite the higher track temperature compared to this morning’s practice, Scott Redding also makes significant progress in terms of lap time, dropping over half a second from his FP1 time.

Michael Ruben Rinaldi (Aruba.it Racing – Ducati #21)
“It was a pretty positive day during which we worked a lot on the bike gathering important information. We were pretty fast, especially in the afternoon, and this gives us confidence. Without a doubt, this is not an easy track, especially for the tires, so it will be very important to make the right choice but also to manage the tyre wear during the race in order to be competitive in the final laps”.

Scott Redding (Aruba.it Racing – Ducati #45)
“If I have to be honest, especially in the afternoon, I felt pretty good with the bike. Unfortunately I had two tyres that didn’t work in the best way and that didn’t allow us to find continuity. In FP2 I had the chance to do a few laps together with Rea and I must admit that the feeling in terms of race pace was very positive. Unfortunately, just like last year, we lose a lot in turns 3 and 4. We will have to work on this tomorrow morning.” 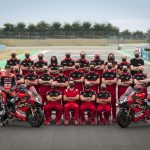 The Aruba.it Racing – Ducati Team ready for the Catalunya Round at the Montmelò circuit in Barcelona (Spain)Press 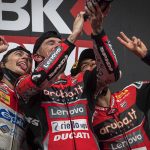 #CatalanWorldSBK R1. What a Saturday! Redding triumphs after a stunning comeback, Rinaldi finishes on podium and Bassani takes part to the sensational Ducati hat-trick.Press